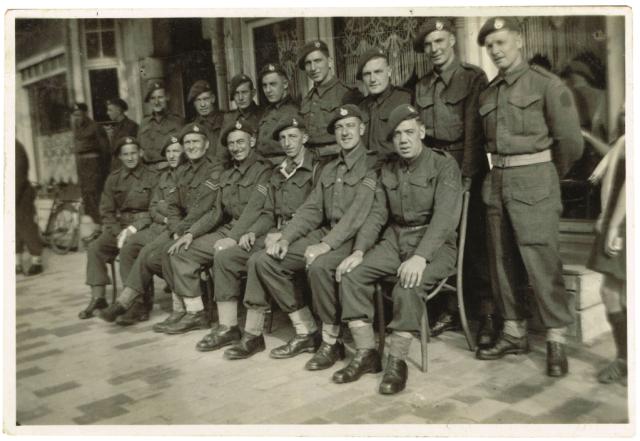 On 1 August 1943 whilst based at 'A' camp, Piddlehinton, Dorset,  the 9th RM Bn., was redesignated No. 46 Royal Marine Commando, Royal Marines. Their Commanding Officer, Lt. Col. Campbell Richard Hardy,  remained as CO of the Commando.

Within a week the unit had moved to Poundbury West Camp in Dorchester, quickly changing to its new smaller Commando establishment.  Those not required for any reason for Commando training were gradually moved to Training centres for landing craft and/or other vessel duties.

In September  advance parties led by Major Lee and Lt. Nunn (both later killed in action) were sent to Troon with the rest of the Commando joining them there on the 15th September. The Commando had already been issued with their Green berets at this stage, parading in Dorchester wearing them on the 11th September before their departure.

The Commando moved to the Commando Depot, Achnacarry on the 23rd October 1943. On completion of their Commando training course at Achnacarry on the 9th November, the Unit moved back to Troon briefly, before being sent to CTC Dorlin in December for further training, and were re-assigned briefly to the 1st Special Service Bde under Lord Lovat. On completion of this additional training, the Unit moved to Worthing to link up with the rest of the Bde.  arriving there on the 19th December. At the end of the month the Commando was ordered to move to Folkestone and rejoin 4th Special Service Bde. This took place on the 3rd January 1944.  Two troops were sent at this time to the CMWTC at St Ives for a 3 week course in cliff climbing and rock assault.   [Source : War Diary]

All this training was focussed on one thing - the allied invasion of North West Europe.

At 0900 on the 7th June 1944 the Unit was landed on Nan White Beach at Bernieres. There would follow actions in the next few days at Petit Enfer, Douvres, La Deliverande and Rots and Le Hamel. On the 17th June the Unit was reassigned to 4th SS Bde whilst dug in at the area of Sallenelles - Hauger. No. 46 Royal Marine Commando continued operations in the area moving forward to Dozule and Breville sur Mer in August.

At the end of September and after suffering heavy casualties No. 46 Royal Marine Commando and the rest of the Bde was withdrawn to the UK and stationed on the Isle of Wight.

No. 46 Royal Marine Commando returned to North West Europe in January 1945 seeing action in Belgium, and in assault river crossings during the advance into Germany under the command of Lt. Col. Thomas Malcolm Gray MC

At the end of war in Europe in May 1945 they were resting in Neustadt, a small town on Kiel Bay, about 12 miles North of Lubeck. They remained in Germany until 8th June 1945.  This period was spent in occupational duties firstly on the Isle of Fehmarn, south east of Kiel,  and latterly at Bad Schwarteau on the outskirts of Lubeck*.

1 Commando Brigade returned to England  to reorganise for further service in the Far East. This became unnecessary after the surrender of Japan. 46RM Commando moved to Tunbridge Wells and at the beginning of August a new CO, Lieutenant Colonel E.C.E. Palmer, DSO, RM, took command*.

Towards the end of October it was decided to disband the Army Commandos, and with them the First Commando Brigade.

On 28 December 1945 at Haywards Heath the Commando returned from a period of leave and preparations were made during the rest of the month for sending off the overseas drafts and for eventual breaking up of the Unit.

The draft was split into two large groups - one to go to 45 Commando RM on 2 January 1946; the second to H.O.C. Wrexham for drafting to 42 and 44 Commandos already in Hong Kong. This second draft being due to leave on 4 January 1946.

Those in certain Age and Service Groups, certain key personnel, and those unfit for overseas service were prepared for drafting to 41 Commando RM except for a small rear party which was left behind to wind up the Unit, this being concluded on 31 January 1946.