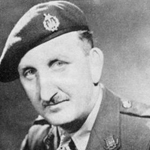 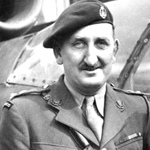 Lt. Colonel Augustus Charles Newman, Officer Commanding No 2 Commando, was awarded the Victoria Cross for his gallantry whilst Military Force Commander of Operation Chariot, St. Nazaire. He was a prisoner of war after the raid.
Extract from Commando Association Newsletter 55 of September 1972
It was with profound regret that we learned on the 26th April last, of the death of Lieut. Colonel A. Charles Newman, V.C., O.B.E., T.D., our first President to pass away whilst in office, and we are deeply indebted to his close friend and comrade, and esteemed Chairman of our Warrington Branch, Lieut Colonel W. O. (Bill) Copland, D.S.O., for the following most fitting tribute:-
"St. Paul's Cathedral, a link with famous men and their memorials for nearly 300 years, can seldom have held a more numerous and more varied a congregation of friends as were gathered together on the first of May, 1972, to pay homage and to show affection to the memory of Charles Newman, V.C., our President, friend of many, enemy to none, example to all of us."
"As a Territorial Soldier he was the epitome of civilian military service in Peace and in War, ranging from his own beloved Essex Regiment to No. 3 Independent Company which saw service in Norway in 1940, then in No. 1 Special Service Battalion to his zenith of Service in No. 2 Commando which he commanded on its formation in 1941."
"To him, this was the ultimate in choice of a service and, because he was so splendid a Commanding Officer, he gained quickly the affection and respect of his new command drawn, as it was, from almost every Regiment in the Army. The high standard he set for every aspect of military training and conduct both on and off parade and his deep sense of fairness, helped to produce a unit in which the only punishment was R.T.U. and whose only standard was perfection. Enough has been written about his part in the Naval and Commando Raid on St. Nazaire on 28th March, 1942, whore he earned his Victoria Cross, to assure for him his special niche in military history. With others of No. 2 and attached Commandos, Royal Engineers and others, together with Royal Navy personnel, he spent 3 years in German prison camps. Here again he contributed much to morale by his conduct and bearing. If this were not enough, and knowing he had still much to give, he commanded 2lst S.A.S. Regiment (Artists) T.A. and was Colonel Commandant of his County Army Cadet Force."
"His links with civil life were many and varied and in many ways required similar outlooks and qualities as-best befit a soldier. As Chairman and Managing Director of a world wide firm of contractors, he led his company through good times and bad with the same kindly handling and belief in those who worked with him. In public life he was a man of many parts with wide interests and affections. He became a Deputy Lieutenant of Essex and Chairman or member of many organizations, civil and sporting."
"Finally, after his retirement in 1971, ever a lover of children, he gave much joy to youngsters in many recreations, Pony Clubs and 'messing about in boats', all so near to his ' Peter Pan' heart. So we say 'au revoir' 'to one of our most excellent of Presidents of The Commando Association, splendid soldier and citizen, head of a loving and beloved family. May his example illuminate our future and may our Nation ever find men like Charles Newman to help guide and protect it in War and Peace "  W. O. Copland.
Bob Bishop No 2 Commando recalled the Colonel’s tremendous work in recruiting, training and forging a fighting unit that he could lead into battle anytime and at anyplace.  Colonel Newman managed to keep his troops at a razor-sharp level of efficiency despite the winter of discontent and impatience of 1940 and the year of frustration that followed it in 1941. Under a lesser leader morale would have surely gone to pot, but, by clever use of novel training programmes which he dreamed up, managed by sheer force of personality to actually improve the ‘readiness’ condition of the Commando, day by day.
During a boxing tournament that had been arranged between No. 2 Commando and a local artillery unit stationed near Ayr, the artillery C.O. entered the hall and took his ringside seat amid some mutterings from his own men to the effect of ‘officers always getting the best seats’. Then Colonel Newman made his entrance and Bob Bishop comments "the difference could be compared to codfish versus caviar." The entire Commando rose up and belted out this verse:
Clap hands! - Here comes Charlie!
Clap hands! - Good Old Charlie!
Clap hands! - Here’s Our Charlie now!!
The Colonel grinned, and turned with his hands clasped above his head in the prize-fighter manner to acknowledge what he knew was a genuine expression of admiration from his boys. The artillery lads looked on in disbelief.
Colonel Augustus Charles NEWMAN VC OBE TD DL (Commanding Officer No 2 Cdo) died 26th April 1972.
Sources
Victoria Cross - London Gazette Supp 37134, page 3171.
OBE - London Gazette Supp. 41856, page 6844.
TD and 1st, 2nd and 3rd Clasps - London Gazettes Supp. 37499. page 1369 and Supp. 39567, page 3172.
MiD - London Gazette Supp. 37396, page 6189.
Linked content:
NEWMAN, Lt Col. Augustus Charles, Citation for VC
Commandos awarded the Victoria Cross
'A document on the object of Special Service'
Photo of Commando in Gallery:
Yes
Archive pages :
No 2 Commando
No 3 Independent Company
St. Nazaire Commandos
‹ 2 Commando Commanders up CHURCHILL, John Malcolm Thorpe Fleming (Lt Col) ›