There are too many operations and/or notable dates to mention each and every one but here are some.
February 1943 saw allied forces involved in ongoing fighting in North Africa after Operation Torch in Nov'42. No 1 Commando were involved in Operation Scorch at Serrat on the 7th and 8th, and later in the continued fighting at Sedjenane on the 26th -28th. Follow this link to read  'An account by Sgt John Southworth MM' of one part of that action.
February 1943 also saw No 6 Commando in action at what became known as the Battle for Steamroller Farm near Mejas-el-Bab, Tunisia. Already depleted through casualties to about 250 Commandos, they came up against a much larger German force which included tanks. No 6 Commando managed to halt the German advance at the Farm for a much needed 6 hours during which they suffered many casualties, killed, wounded, or missing. Later the Commando returned to bury their dead described in detail in by their CO Brigadier Mills Roberts in his excellent and highly recommended book Clash by Night.
February 1944 saw 40RM Commando being reinforced at the River Garigliano and Monte Ornito and Monte Faito area of Italy by HQ 2 Cdo Bde., No 9 Commando, 43RM Commando, and the Belgian troop of 10IA Commando. The subsequent ferocious fighting in the area saw many Commando casualties.

Amongst the fallen of No 9 Commando were second in command Major Francis Clark, the intelligence officer Capt McDougall-Porter, and their RSM Tom Beardmore.
Post war No 9 Cdo Veterans built a cairn and placed a small memorial at the location which is still there to this day.
This link will take you to 'Photos of the graves of some of the Fallen' within our war graves albums for Italy.
5th February 1944 The burial service for Captain Jack Stormont Bare of No.2 Commando took place in the afternoon at the British Naval Cemetery at Vis, the first British serviceman to be interred there for over 130 years. Read the No 2 Cdo War Diary entry about the original ceremony by clicking on his name above. 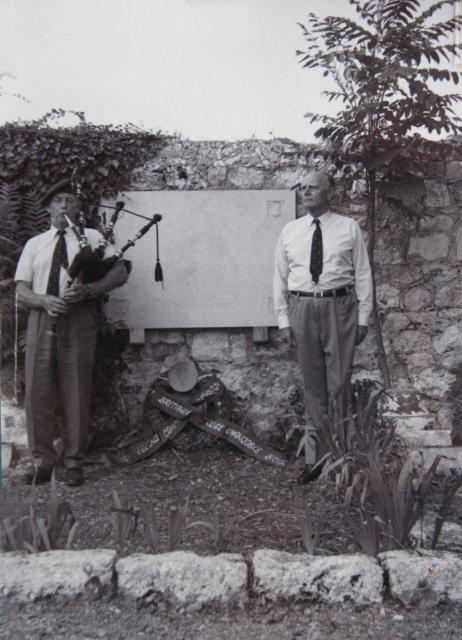 In the photograph Lt Col Jack Churchill, CO of No 2 Commando at the time, plays his bagpipes alongside his brother Tom Churchill, at a memorial service beside the British plaque in July 1973.
February 1945 saw continued operations in the Far East involving 3 Cdo Bde consisting of Nos 1 and 5 Army Commandos and 42 and 44RM Commandos, as well as the SBS. The fighting in the Arakan campaign was tough and casualties high. 3 Commando Brigade were commended by the CO of 15 Indian Corps to which the Brigade had been attached. 'Read the commendation.'
Follow this link to view 'Photos of some of the Commando graves' from the Arakan campaign in our war graves album for Burma (Myanmar).

The end of February 1945 and the next few months saw 2 Commando Brigade involved in the patrolling and holding of the 5 Corps winter line along the River Reno in Italy, whilst 41RM Commando were involved in patrolling the Lower Maas. 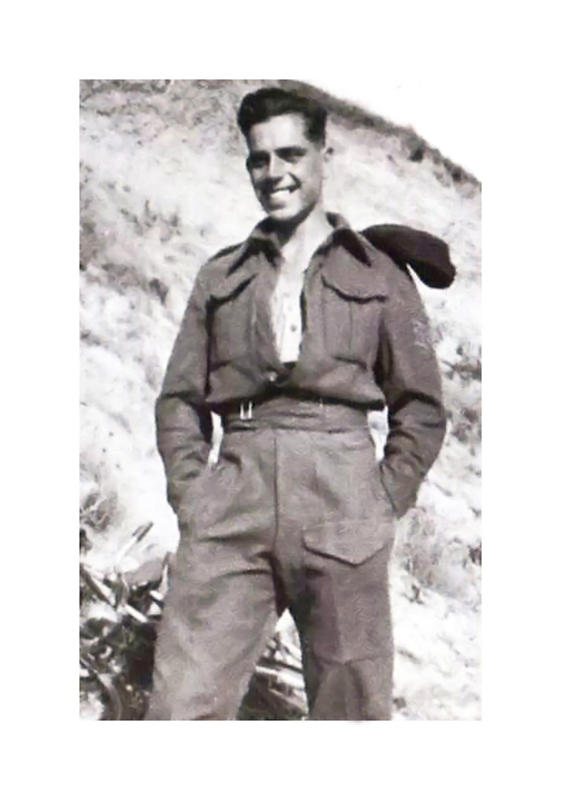 February 1945 also saw the executions of those involved in Operation Checkmate, a Combined Operations raid grouped under the unit title of No 14 Commando. The raid was on Axis shipping in the harbour at Kopervik, Norway on the 29th April 1943.