A Farm near El Aroussa
Tunisia
36° 27' 16.92" N, 9° 30' 30.96" E
Units:
6 Commando
A battle involving allied forces which included No.6 Commando against an enemy force comprised of troops of the Hermann Goering Jaeger Regiment supported by tanks.
No.6 Commando was tasked to patrol a wooded mountainous area North of Bou Arada after intelligence reports of German infiltration through the hills north east of El Arousa. They were not expecting a large enemy force to be present.
The Commando at the time consisted of 4 Troops and an HQ comprising 15 Officer's and 231 O.R.'s.
At dawn a Fighting Patrol of 30 O.R.'s led by Captain Spooner was ambushed and attacked. The rest of the Commando engaged the attackers and during the ensuing fighting a support troop of 3 armoured cars and 7 carriers of 56 Recce Regiment arrived to assist.
The fierce and at times hand to hand fighting continued with the focal point being the farm on a hill overlooking the road between El Arousa and Medjez El Bab. The Farm had a large Steamroller on it hence the battle name.
The enemy had superior numbers and were later supported by tanks and as a result the lightly armed Commandos were forced to withdraw with over 40% casualties but had succeeded in holding up the enemy attack. The enemy dug in but were later dislodged by allied forces supported by tanks.
Sources
Report from Lt. Col. Mills-Roberts in the No.6 Commando War Diary.
DSO Award recommendation for Lt.Col Mills-Roberts ref National Archives file WO373/1/97.
Account in The Green Beret, author Hilary St. George Saunders. 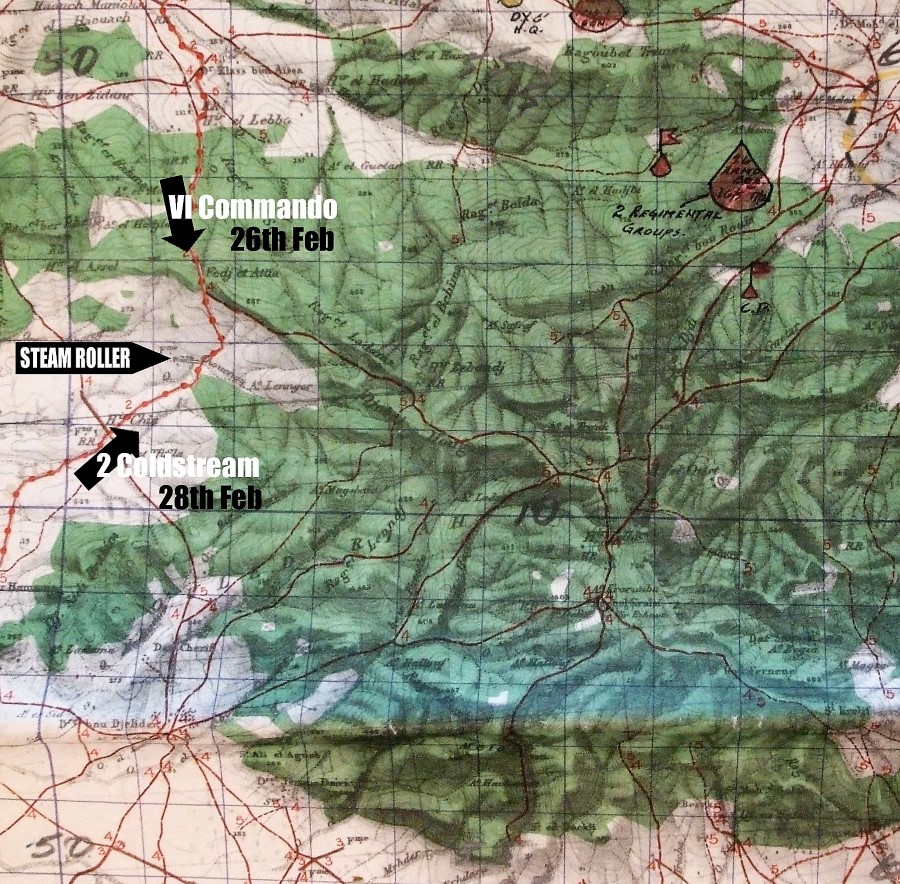