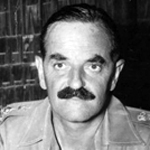 Officer Commanding No 1 Commando 1943 - 1945.
Joined No 1 Commando in 1941.  As Captain of 1 troop in 1942 he took part in a raid at St Cecily Plage  and the later Operation Torch landings. He received a Mention in Despatches North Africa. He took command of No 1 Commando from his cousin Tom Trevor when the Commando sailed to India in 1943. During the campaign in Burma he was awarded the Distinguished Service Order for gallant and distinguished services.
Post war in Korea he received a 2nd Mention in Despatches, and was appointed O.B.E. (Military Division) for gallant and distinguished services during the war.
1958 received a 3rd Mention in Despatches whilst commanding the Cheshire Regiment in Malaya.
1966 retired from military service as a Brigadier.
2003 Memorial Service held on Sunday 14 September at Chester Cathedral.
Brigadier Ken Trevor was President of the Commando Association during the periods 1965/6, 1985/6 and 1989/90. Henry Brown OBE, Secretary of the Commando Association wrote this tribute in their Newsletter 116.
"The Brigadier, a greatly esteemed officer and very fair disciplinarian, took over command of No.l Commando in 1943 from his cousin, Lieut. Colonel Tom Trevor, O.B.E., and will long be remembered for his constant caring thought and understanding during No.1 Commando's time in India, and especially later in 1944/45 during fierce action against enemy forces in the Burmese campaign, particlarly during the battle of Hill 170 at Kangaw after which he was awarded the Distinguished Service Order.
Association members will be aware of the Brigadier's very keen interest in our affairs and activities, especially during his three terms as our President, and will agree that in the passing of Ken Trevor, as he was affectionately known, the Association has lost one of its most important stalwart supporters."