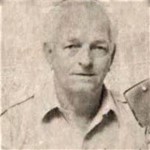 Lance Corporal John Farrington was reported missing on 2 June 1941 during operations at Crete with Layforce. He was held as a prisoner in both Germany and Poland, and later awarded the British Empire Medal (Military Division) for his numerous escapes from different camps.
Citation
"Farrington was captured in Crete in June 1941, and held a prisoner in Germany and Poland. His first escape was in September 1941. He slipped from a column of new prisoners arriving at Luckenwalde but was arrested next night and sent to Berlin.
In March 1942 with two companions, Farrington let himself out from his working camp by using home-made duplicate keys. They walked through Berlin disguised as workmen, and by walking and catching goods trains, reached German occupied Ukraine before being found and returned to Berlin.
He was sent to hospital suffering from blood poisoning , and in July 1942 organised an escape from there. He picked a lock, found a pair of pliars and made a hole in the wire through which he and two friends crawled. They were caught at a railway station five days later.
He and six others escaped from Stalag 21A in Poland through the barbed wire in September 1942. Farrington's party was recaptured at Konigsberg. Shortly afterwards he masqueraded as a sergeant and went to the NCO's camp near Regensburg where he made several efforts to escape, once being wounded in the attempt. He took an active part in tunnel digging.
In April 1945 he and two others left the line of march and reached the village of Hohenberg. Here they pretended to be an advance Allied patrol, collected all the arms in the locality and handed over to the Americans when they arrived two days later."
Newspaper accounts can be read in our gallery entry in his name [more....].
Sources
Casualty Lists / National Archives file WO417/28, WO417/31, and errata in WO417/63.
Prisoners of War Lists / National Archives file WO392/1.
BEM - London Gazette 37808, page 5948.
BEM - National Archives file WO 373/102/762.

Notes
Two of the Casualty Records list him as No.4 Commando which for a short period was redesignated as part of 3 Special Service Bn. along with No.7 Commando but they reverted back to their Commando designations during the period No.7 left for the Middle East as part of Layforce. Some from No.4 Commando did also remain to become part of Layforce.  Casualty Record WO417/63 shows 'A' Bn Layforce which was No.7 Cdo.