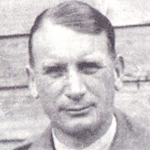 Lieutenant Colonel James Louis Moulton, Commanding Officer 48RM Commando until March 1945, was awarded the Distinguished Service Order for gallant and distinguished services while operating with the Army during the successful landings in Normandy. [1] .
Post war he commanded 3rd Commando Brigade RM in the Mediterranean, and subsequently became Chief of Amphibious Warfare.
His death was announced in Commando Association newsletter 98 issed March 1994 where their General Secretary Henry Brown OBE wrote this obituary:
"As many comrades will already have read the excellent detailed obituary notices which appeared in the national press, there is little to be added to the long list of accomplishments of our esteemed late Patron, General James Louis Moulton, CB., DSO., OBE., RM., or General 'Jim', as he was affectionately known to most of us.
Although only privileged to enjoy his patronage in recent years, it was a period in which many of our events were greatly enhanced by his presence, and it is indeed so sad that we are now denied the joy of inviting him again to come amongst us. He was at all times so kind, considerate and helpful, and it is most satisfying to know that he much prized his appointment as a Patron of our Association.
Our deepest sympathy has been conveyed to Mrs. Barbara Moulton and her family in their great loss."
Sources
[1] London Gazette 36676, page 4008.
[1A] London Gazette 37519, page 1631.
[2] London Gazette 38797, page 6.
[3] IWM interview with him. IWM Catalogue number 6930.
[4] London Gazette 40669, page 2.
[5] Globe and Laurel Oct 1970.
[Image] Haste to the Battle, author Maj. Gen Moulton.
Photo of Commando in Gallery:
Yes
Archive pages :
48RM Commando
RM Commandos 1946 - present
‹ 48RM Commando Commanders up PRICE, Martin ›