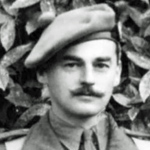 Private Donald William Roy, a Cadet of the Fettes College Contingent Junior Division O.T.C., received his commission into the Liverpool Scots TA on the 17th June 1939.
Lieutenant Roy was mobilised in August 1939 and posted to the 2nd Battalion. From there he volunteered for the Independent Companies and was posted to No 3 Platoon,  No 4 Independent Company.
In May 1941 he and the rest of No 4 Ind. Coy sailed as part of Scissors Force to Norway (Operation Avonmouth).
When they returned he was posted to 'B' Coy. No 1 Special Service Bn. and when the Special Service units were restructured he joined the newly raised No 2 Commando in 1941 as Captain of 5 troop. This troop was known at the time as the 'Liverpool Scottish' troop.
Captain Roy was awarded the Distinguished Service Order " in recognition of gallant and distinguished services during the raid on St. Nazaire. "
He led an assault party which had sailed on board HMS Campbeltown, and after the ship rammed the dock gates, they disembarked to commence the assault protecting the demolition teams, and completed their objectives. Wounded during the raid, he was taken prisoner, and transported to Oflag 9A/H at Spangenberg bei Kassel, Germany.
Post war he served in the Camerons TA ( Highland Brigade).
Sources:
Liverpool Scottish Museum.
St Nazaire Society website.
Prisoners of War 1715-1945 / National Archives file WO392/1
1939 London Gazette 34636, page 4043.
1945 London Gazette 37162, page 3493.
1964 London Gazette 43221, page 464.
Photo of Commando in Gallery:
Yes
Archive pages :
No 2 Commando
No 4 Independent Company
St. Nazaire Commandos
Prisoners of War