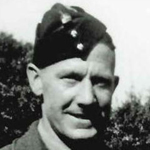 Major William Copland was second in command of No 2 Commando. He had previously served with No 4 Independent Company. Major Copland was reported missing 28 March 1942 after Operation Chariot at St. Nazaire, later found to be a prisoner of war. Subsequently awarded the Distinguished Service Order for gallant and distinguished service.
Recommendation
On 28 March 1942 during the commando raid at St Nazaire, France.
Major Copland was my 2 i/c and his first duty was, as Commander of the Military personnel on board HMS Campbeltown, was to supervise the disembarkation, and evacuation of wounded.
After the Campbeltown had rammed the Dry Dock gates the ship was on fire forward and under heavy fire from enemy shore batteries and AA guns. Under intense fire and very difficult conditions, the disembarkation was completed in very rapid time under his personal direction.
Many of the Commando force were wounded, some very seriously, and Major Copland, showing total disregard for his own personal safety, effected the evacuation of all wounded on to the light naval craft, by doing so expedited the whole disembarkation.
During the fighting and demolition work on shore, Major Copland was again outstanding in his efforts to overcome the enemy. When the work of the destruction was complete and the escape from the port proved to be an impossibility, as the Royal Navy had been forced to withdraw,  Major Copland played a major part in reorganising the force and breaking out into the town.
He was conspicuous throughout the entire fighting and his leadership was instrumental in the destruction of many of the enemy and his equipment.

Major Copland, throughout this action, proved by his leadership, courage and disregard for danger, to be a great example to all."