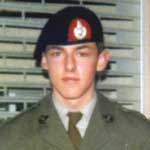 Marine Stephen Jacques, aged 18 and a 'veteran' of the Falklands campaign, died from exposure during a training exercise in Norway in 1983 [1] [2].
His squad from 42 were undergoing routine arctic warfare training in Norway.  They were caught in un-forecast full blizzard conditions. During the digging of snow holes for shelter , he and another, became very cold and wet, and both later died of hypothermia before rescue could be effected. [Source:  See entry on linked content below for Surg. Lieut. Hodgson.]
Marine Jacques was a signaler attached to K Company 42 Commando RM during the assault on Mount Harriet, Falkland Islands.  He suffered severe blast wounds and he was resuscitated three times throughout the night and survived. Unfortunately he was one of the two members of the unit who tragically died in the incident in Norway [3].
Surgeon Lieutenant (D) Peter Hodgson also died.
Sources
[1] AFM ROH
[2] Globe and Laurel Feb/March 1983 edition.
[3] Globe and Laurel 2012 - 30th Falklands Reunion article.
[Image] His brother Paul Jacques.
Primary Roll of Honour:
'Roll of Honour since 1946'
Linked content:
HODGSON, Peter
Photo of Commando in Gallery:
Yes
Archive pages :
RM Commandos 1946 - present
42 Commando RM
Falklands