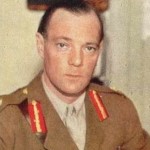 Commando Association Obituary
Written by Maj. Gen. J.C. Haydon CB, DSO, OBE.
"Bob Laycock died in March 1968 at the age of only 60, with so much still to give to life and to people, and with so much yet to do had he been spared to us. He is a grevous loss.
Bob Laycock joined the Commandos at the earliest moment, and if the question had been put to him, he would surely have said that though he often felt frustrated - as did we all from time to time - he never felt unhappy in his Special Service days. They did, in fact, provide him with the essential framework in which he could bring in to play all those remarkable qualities that were his and that unquenchable spirit of gay adventure that permeated his whole outlook on life.
It would be hard indeed to imagine anyone who approached more nearly than Bob Laycock to all that the ideal Commando soldier should be. He was a valiant character and a man born to lead. He was, at once, daring and fearless, imaginative yet practical, and ready always to accept responsibility and take decisions. There was not a trace of pretence or pretension in his character and he could not in his life ever have done a mean thing. Men followed him with devotion and willingly, with no qualms in their minds or in their hearts, for he inspired utter confidence, and led by the force of his own personality and example. He never sought the limelight; he never sought fame but both sought him and no one grudged him either. The honours and awards that became his were no more than the barest recognition of his worth.
Thus, he goes, leaving behind him an illustrious record of high endeavour and achievement and we who knew him and served with him in the Commandos are proud and privileged to have done so.
"He most prevails who nobly dares" was the faith that lit and inspired the whole life of that other gallant leader, Admiral of the Fleet Lord Keyes, the first head of the Combined Operations Command. Surely it was exactly the same brave, simple belief that inspired and fortified his successor, Bob Laycock, throughout his life.
Our very deep and most sincere sympathy goes out to Lady Laycock and his family in the irrepearable loss they have sustained".
Sources
Liddell Hart Military Archives, King's College Collection, ref. GB0099 KCLMA Laycock.
DSO: London Gazette 36180.
Order of St John: London Gazette 36866.
Grand Officer of the Orange Nassau with Swords (Netherlands): London Gazette 38288.
KStJ : London Gazette 40378.
Legion of Merit (USA) : National Archives file WO373/149/72.
Colonel Commandant SAS: London Gazette 42004.
Obituary in Commando  Association newsletter 47 issued September 1968.
Photo of Commando in Gallery:
Yes
Archive pages :
Special Service Brigade / Group
No 8 Commando
Layforce
Special Air Service
‹ HAYDON, Joseph Charles up 1 Brigade War Diaries ›