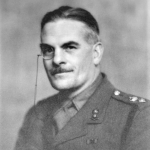 13 July 1921 Royal Military Academy commissioned Second Lieutenant in the Royal Engineers [1].
13 July 1928 promoted Lieutenant [2][2a].
13 July 1932 promoted Captain [2].
1 August 1938 promoted Major [2].
29 July 1940 - 28 October 1940 - Acting Lieutenant Colonel [2].
28 October 1940 - Temporary Lieutenant Colonel [2].
1940 posted Commanding Officer of No.9 Commando on its formation [3].
June 1942 (Royal Engineers attached 10 Indian Divn.) commanded the demolition scheme to cover the withdrawal from Sollum and Mersa Matruh, Egypt, awarded D.S.O. [4][4a][4b].
28 June 1942 (10 Indian Divn, Madras S&M) reported missing believed prisoner of war [4b].
1942 Prisoner of War Camp 21 at Chieti, Italy [5].
May 1944 P.O.W. in German hands repatriated due to acute T.B. [6].
8 December 1944 placed on the HP List on account of disability [7].
14 July 1945 retires on account of his ill health, and granted the honorary rank of Lieutenant Colonel [8].
18 September 1946 died Ontario Canada [9][10].
Buried at King's Cemetery, Ontario [10].
Distinguished Service Order recommendation
At Sollum in June 1942 Lt. Col. Saegert was in entire charge of the large demolition scheme which accompanied the withdrawal. The thorough and conscientious way this work was carried out at very short notice was largely responsible for denying to the enemy any of the large accumulations of stores which were collected in the position.
As a final task and at considerable personal risk Lt. Col. Saegert himself carried out the blowing up of a large portion of the Sollum Pass Road, thus denying that route to the enemy for some time.
Again at Mersa Matruh on the 27/28 June 1942 Lt. Col. Saegert supervised the execution of the the vast demolitions with highly successful results and so thoroughly that little of any use fell into enemy hands.
Regardless of his own safety Lt. Col. Saegert remained to ensure that everything had been destroyed and that the demolition parties had withdrawn. Although he could have escaped by boat he elected to fight his way out with his Sappers. Throughout both these operations his personal courage and leadership were outstanding and it was mainly through him that both these operations were successfully carried out [4a][4b].
Sources
[1] London Gazette 32404.
[2] Gradation Lists of Officers in the British Army / Half-Yearly List For 31 Dec 1940.
[2a] London Gazette 32844.
[3] No.9 Commando War Diary.
[4] London Gazette 36994, page 1547 (announced 22 March 1945)
[4a] National Archives file WO373/97/149.
[4b] Casualty Lists /National Archives file WO417/3.
[5] Prisoners of War Lists for Italy / National Archives file WO392/21.
[6] Find My Past record.
[7] London Gazette 36829, page 5619.
[8] London Gazette 37214, page 4066.
[9] Government Probate Death Indices.
[10] Photo of headstone on FindaGrave website.
[Image]  © Alex Saegert (grandson).
Notes
There is a file at the British Library (Asian and African Studies) reference MSS EUR/ F296/3 (Madras Sappers Officers Association Papers) listed as Correspondence regarding the citation of Maj J M Saegert RE. Full details not known.
Photo of Commando in Gallery:
Yes
Archive pages :
No 9 Commando
Prisoners of War WW2
‹ 9 Commando, Overseas up TOD, Ronald John Frederick (Brig) ›