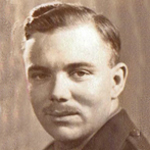 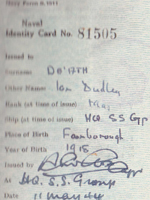 Lieutenant Colonel Ian De'ath died whilst serving at RMB Plymouth.
In 1940 the then Lieut. De'ath RM was awarded the DSO for his actions in December 1939 whilst serving on HMS Ajax after she was hit by a salvo from the Graf Spee during the battle of the River Plate.  He was in charge of a Turret when an 11-inch shell passed through the working chamber below, went at once to the hatch, which had been blown open and was giving out sparks and smoke, to find out the damage. He gave the orders needed to ensure the safety of ammunition and at once did what he could to bring the Turret into action again. He set a fine example of courage and presence of mind [1]
In May 1944 he was a Major attached to the HQ Special Service Group. [2]  In late July 1944 Major De'Ath was posted to 45RM Commando at le Plein, France as second in command, remaining with them until November 1944 [2A].
In September 1945 it was announced that the then Lieutenant, Acting Lieutenant Colonel, De'ath had been awarded the MBE for devotion to duty and great ability in the planning, and courage in the execution of, Commando operations during the Italian campaign. [3]
In 1957 whilst a Major with 45 Commando he received a MiD for distinguished services during anti terrorist operations in Cyprus. [4]
Sources:
1. London Gazettes supp. 34796, page 1057.
2. Naval Identity card no 81505 issued to Maj. De'ath 11th May 1944.
2A. Book published for those who served called The Story of 45 RM Commando.
3. London Gazettes supp. 37271, page 4637
4. London Gazettes supp. 40987, page 653.
Primary Roll of Honour:
'Roll of Honour since 1946'
Archive pages :
45RM Commando
RM Commandos 1946 - present
2 Special Service / Commando Brigade
Cyprus