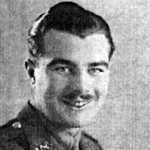 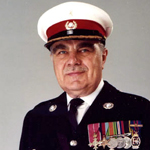 Tom Sherman volunteered for the Independent Companies and was posted to No.4 Ind. Coy.  He took part in Scissorforce, the North West Expeditionary Force in Norway, and after joining No. 2 Commando he attained the rank of TSM in 4 troop.  He took part in the Vaagso raid and St Nazaire. During the latter he was one of the Commando contingent on ML156. He was one of those that took part that were evacuated back to the UK.
Tom was offered a chance for a Commission but rejected it initially as he would have had to leave the Commando. However he later accepted it as long as after OCTU he could return to No.2. This was arranged, however after he was commissioned he was put on a ship which was meant to take him to Gibralter but in fact went to Freetown. Tom then rejoined the Kings Regt.
After the war Tom served as Captain with the Royal Marines Forces Volunteer Reserve from 1954, later commanding the Royal Marines Reserve (Merseyside) as Lieutenant Colonel from 1965 - 1970 . It was announced in  the New Year Honours List of 1970 that the then Lieutenant Colonel Thomas Sherman, V.R.D., Royal Marines Reserve, had been appointed O.B.E. *
On the 1st January 1973 Lt Col. Thomas Sherman O.B.E., V.R.D. was appointed Honorary Colonel, Royal Marines Reserve. **
Tom went on to serve the region as Deputy Lieutenant of The County of Greater Manchester in 1977 and High Sheriff of the County in 1985/86.
Sources
Tom Sherman
*   London Gazettes Supp. 44999, page 5.
** London Gazettes Supp. 45899, page 1679.
St Nazaire Society website.
Commando Association newsletter 42 of March 1966.
RM Historical document.
Greater Manchester Council online archives.
Photo of Commando in Gallery:
Yes
Archive pages :
No 2 Commando
No 4 Independent Company
St. Nazaire Commandos