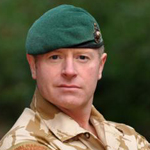 Corporal Stephen Walker died in an explosion that happened near Patrol Base Almas, in Sangin, Helmand province. He was conducting a joint foot patrol with the Afghan National Army to reassure and improve the security for the local population in the area when the incident took place.
Stephen Walker  joined the Royal Navy on 19 May 1986, qualifying as a cook and serving at HMS Raleigh, HMS Cochrane and on board HMS Cleopatra. He subsequently transferred to the Royal Marines, entering Recruit Training at the Commando Training Centre Royal Marines on 12 March 1990, passing for duty on 7 November 1990. During his 20 year career he served across the broad spectrum of Royal Marine Units including; Fleet Protection Group Royal Marines, 40 and 45 Commando Royal Marines and the Commando Training Centre Royal Marines as a Recruit Troop Instructor.
He had a widespread background of instructional expertise in areas such as Mortars, Platoon Weapons and Jungle Warfare. He also had considerable operational experience in theatres such as Northern Ireland, southern Turkey and northern Iraq and, most recently, Afghanistan. In 2005, he excelled in his Junior Command Training at the Commando Training Centre Royal Marines, placing in the top three students on his course. This much deserved promotion gave him the opportunity to pass on his wealth of knowledge and experience to his young marines, something for which he felt extremely passionate about.
Joining 40 Commando Royal Marines in July 2009, he immediately conducted Mission Specific Training for deployment to Afghanistan. In April 2010, he deployed with Alpha Company, 40 Commando to Op HERRICK 12, employed as a Section Commander based out of Patrol Base ALMAS. His Company had been responsible for providing security, thereby increasing their freedom of movement, to the people of Sangin during his time in Afghanistan. [Source: MOD].
Primary Roll of Honour:
'Roll of Honour since 1946'
Photo of Commando in Gallery:
Yes
Archive pages :
RM Commandos 1946 - present
40 Commando RM
Afghanistan