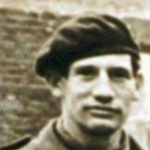 Lieutenant Roy George Herbert DCM, MM, died during operations in Normandy, France.
Son of David and Alice Herbert; husband of Janet Craig Herbert, of Plymouth [1].
Military Medal
1940 (Private) awarded the Military Medal for gallantry whilst serving with the 5th Northants at Oudenarde. [2]
"On the night of 21st May two sections "A" Company were ordered forward to assist "D" Company. Pte. Herbert was in one of the sections. On arrival he was told that 2nd Lt. Pemberton was lying out in front of the post near the canal. He went to the officer's assistance and found him to be seriously wounded. He attended to the officer and dragged him to the shelter of a nearby house.  He then returned and fetched the stretcher bearers from "A" Company and assisted them to get the officer to the regimental aid post. All this time the post was being heavily shelled and machine gunned."
Roy George Herbert, a Monmouthshire man, was educated at Blaina Central School, his home being at Largs, Scotland. When the Commandos were formed he volunteered to join them and was attached from his Regiment to No.3 Commando.
Distinguished Conduct Medal
Lance Sergeant Herbert M.M., No 3 Commando, was awarded the Distinguished Conduct Medal for gallantry during the raid at Vaagso, Norway. Part of the citation reads "Throughout the operation he showed great determination, initiative, organising ability, and powers of leadership. His personal gallantry and drive set an inspiring example to those under him" [3][4].
He was later selected for officer training and sent to O.C.T.U.  After receiving his commission on the 21st July 1943 he rejoined No 3 Commando in Italy [5].
When the Commando returned to the UK he was reluctantly attached to the training staff at the CBTC, Achnacarry, along with fellow No 3 Commando Officer's  Majors John Pooley and Brian Butler. Brigadier Durnford-Slater who issued the direct order stated " I was determined that those Commandos who had in previous operations taken the most consistent risks, should be placed in safer employment."
However after continuous pleas to be allowed to rejoin the Commando, the Brigadier agreed and all 3 returned. The three officers were among the many who were later killed during the Normandy landings. [6]
Sources:
[1] CWGC
[2] London Gazette 34975, page 6116 & National Archives WO 373/16/247
[3] Article in the Western Mail - Monday 08 June 1942.
[3]  British Newspaper Archive (website britishnewspaperarchive.co.uk); The British Library Board.
[4]  London Gazette 35510, page 1506  & National Archives WO 373/93/258
[5] OCTU - London Gazette 36247, page: 5018
[6] Commando - Memoirs of a Fighting Commando in WW2 author Brig John Durnford-Slater.
Primary Roll of Honour:
3 Cdo. Roll of Honour
Photo of Commando in Gallery:
Yes
Photo of grave in Gallery:
Yes
Archive pages :
No 3 Commando