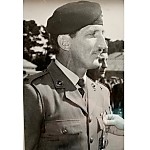 Marine Robin Bainbridge died in service in 1985.
He was the recipient of a Mention in Despatches in recognition of service during the operations in the South Atlantic in 1982 (Falklands).
Recommendation
"Mne. Bainbridge was one of four mechanical handling equipment drivers based at the forward Brigade Maintenance Area at Teal Inlet during the latter half of Operation Sutton.
During the twenty day period Mne Bainbridge in particular, along with his tireless comrades, handled the movement of all stores between the Beachhead and the Stockholding Areas and landing site. The total tonnage brought ashore during this period was large by any standards and the work involved required the MHE to operate for most of each 24 hour period regardless of darkness, weather conditions, or expected enemy air activity.
Throughout this phase of Operation Sutton Mne. Bainbridge and his fellow drivers displayed a remarkable capacity for hard work, together with a consistent disregard for his own personal safety for, regardless of air raid warnings, fatigue, physical discomfort and frequently dangerous driving conditions, he worked tirelessly to ensure that badly needed ammunition and stores were made available in the shortest possible time.
Mne Bainbridge in particular, earned the respect and admiration of all of those personnel who worked with him and he is therefore recommended for the operational award of a mention in despatches."