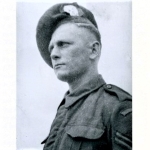 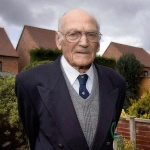 Corporal Robert Wright was reported missing 28 March 1942 after Operation Chariot at St. Nazaire, France, later found to be wounded and a prisoner of war. He embarked for the raid on HMS Campbeltown.
Obituary
Sapper Corporal Robert Ernest Wright was a member of 'A' Troop, 12 Commando, having been originally with No. 267 Field Company R.E. He was born in Binton, Warwickshire, on December 24th 1918 and was therefore a mere 23 when he sailed up the Loire on board HMS Campbeltown. A chargehand joiner prior to the war, Bob was a keen sportsman, having ridden in motorcycle trials and played cricket and soccer for the village teams. Perhaps less predictably, he had also played piano accordion with a Latin-American dance band!
Bob was serving in Northern Ireland when he volunteered for Special Service, mustering in the City Hotel Londonderry (Stroke-City to those familiar with Ulsterese). 12 Commando then moved to the UK where, during a Snow and Mountain Warfare Course in Glencoe, Bob first met Gerard Brett, who would be his Party officer at Saint-Nazaire. He took part in Operation 'ANKLET', the Christmas 1941 raid on the Lofoten Islands, before being hand-picked to train in dock demolitions prior to embarking for Saint-Nazaire.
On the run-in to ramming, Bob was in the Wardroom with the others of his demolition party, making his way up to the main deck immediately after the ship hit the dock caisson. Bob was hit almost immediately, a chunk of enemy steel embedding itself in his knee. Where lesser men might have thought enough was enough, Bob - in spite of a serious wound - nevertheless got himself down onto the caisson and, carrying a dead weight of explosives in his pack, remained with Brett's party all the way through the attempted demolition of the inner dock caisson, all the time under enemy fire.
During the withdrawal Bob found refuge in a cellar with TSM Haines, Lance-Sergeant Challinton, Lance-Corporals Howarth and Douglas, and Private Harding, all of who were determined to escape the tightening German cordon.
Realising that he would only hold the others up, Bob allowed himself to be taken prisoner. He was eventually incarcerated in the notorious Lamsdorf PoW Camp, whose occupants were marched west late in the war to escape the Russian advance. He was eventually liberated by General George Patton's troops.
You were a brave man Bob, and you will be missed."
Wriiten by James Dorrian, historian and author of Storming St Nazaire.
Sources
Casualty Lists  / National Archives file WO417/41, WO417/44 amended by WO417/50..
Prisoners of War  / National Archives file WO392/1.
St Nazaire Society website.
[Images] Paul Stratford, great nephew.
Photo of Commando in Gallery:
Yes
Archive pages :
No 12 Commando
St. Nazaire Commandos
Prisoners of War

Some of the WW2 Commando operations and events that took place in the month of July [read on......].