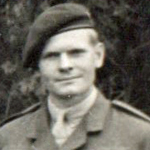 Lieutenant Robert Dawson was one of the first subalterns to join No 4 Commando in 1940, later taking part in the Dieppe raid  as Captain of 'C' troop.
Post war Lt Col Dawson was a regulat attendee at remembrance events in France and Holland.
Commando Association obituary by Henry Brown OBE.
"Much has already, and rightly, been recorded of Robert Dawson's tuly sterling service as a Troop and later the Commanding Officer of No. 4 Commando.
The men of this Commando Unit, both French and British,  at all times followed him willingly and with devotion, having full confidence in his wise and fearless leadership.
All were proud and privileged to serve under his command. One cannot adequately describe in words Robert Dawson's true worth to our Association, or the degree to which he will be greatly missed.
In particular, we shall treasure the memory of his two terms as an outstanding President, and the many years he served as a Trustee of the Commandos' Benevolent Fund.
Whenever we sought his wise counsel, which was often, this was always forthcoming and there was never any doubt that the opinions he so kindly expressed had originated only after much careful thought.
We will never forget his charm, kindness and understanding, and will always feel very privileged to have known him. We deeply mourn the passing of a very dear friend and comrade, and a very staunch supporter of our Commando cause.
Our very deep and sincere sympathy goes out to his dear widow, Jean and her lovely family, in the irreparable loss thet have sustained" [6].
Sources
[1] London Gazette 36679, page 4043
[2] London Gazette 37213, page 4053
[3] National Archives WO373/185.
[4] London Gazette 41589, page 20.
[5] Commando Association newsletters 29 and 67.
[6] Commando Association newsletter 87.
The Fighting Fourth by Maj. James Dunning.
Photo of Commando in Gallery:
Yes
Archive pages :
No 4 Commando
‹ LOVAT, Lord up 4 Commando Nominal Roll ›