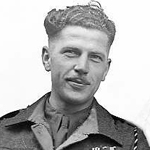 Lance Sergeant Richard Bradley, 1 troop,  was awarded the Military Medal for gallant and distinguished services in the field relating to his successful escape in October 1943 after being wounded and captured during the raid at St Nazaire in March 1942. He was one of the Commando contingent on board motor launch ML 457.
He  escaped to Switzerland with two others, LSgt. Alf Searson (2 Cdo) and Pte. Jim Brown (5 Cdo). They were then interned. All 3 were later awarded the Military Medal.
Extract from his own account
Source: BBC - WW2 People's War website [Read the full account here].
"Alf Searson and I were in motor launch number 11 (ML 457), carrying about 60lbs of demolition charges each in a rucksack. Although we made a perfect landing I didn’t get to our destination. On the way a bullet hit me in the chest, went through my lung and came out through my back below the shoulder blade. For a split second I thought that somebody had given me a push, then I could feel the warm blood running down my back and front and my knees giving way. Lt Watson, who was next to me, gave me a morphine injection, so that with that injection and the enormous loss of blood I began to lose consciousness, saying a prayer and thinking of my mother."
His death was announced in Commando Association newsletter 118 issued February 2004.
Additional sources
London Gazette 37194, page 3858.
POW - Escape via Switzerland - report / National Archives file WO208/4242.
British Army Casualty Lists /National Archives files WO417/48; WO417/68; and WO417/84.
German Record Cards of British PoW's / National Archives file WO416/39/166.
St Nazaire Society website
Linked content:
SEARSON, Alfred - Escape Evasion report
Photo of Commando in Gallery:
Yes
Archive pages :
No 2 Commando
St. Nazaire Commandos
Prisoners of War