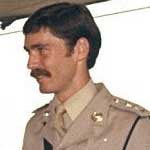 Lieutenant Richard Nunn died during Operation Corporate, Falkland Islands, 1982. He was posthumously awarded the Distinguished Flying Cross for gallant and distinguished service.
Citation
On Friday 28th May 1982 the 2nd Battalion The Parachute Regiment was engaged in fierce fighting to take enemy positions in the area of Port Darwin. From dawn, Lieutenant Nunn, a Scout helicopter pilot, had supported the Battalion flying vital ammunition forward to the front line and had evacuated casualties heedless of enemy ground fire.
After flying continuously for three and a half hours, it was learnt that the Commanding Officer and others in Battalion Tactical Headquarters forward had been severely wounded.
Lieutenant Nunn was tasked to evacuated these casualties collecting the Battalion Second in Command en route. However, five minutes after take off, suddenly and without prior warning, two Pucara aircraft appeared from the South and attacked the Scout with rockets and cannon fire. By great flying skill Lieutenant Nunn evaded the first attack but on the second his aircraft was hit and destroyed. Lieutenant Nunn was killed instantly and his aircrewman Sergeant Belcher was grieviously wounded.
Lieutenant Nunn displayed exceptional courage, flying skill and complete devotion to duty in the face of the enemy. His achievements that day, supporting the Battalion, were exceptional and were instrumental in the eventual victory.
Extract from the Globe and Laurel July - August 1982 edition.
The tragic death of Lt Richard Nunn during the Falkland conflict was a sad and bitter blow to all of us fortunate enough to know him and will be particularly felt by his friends.
Richard had served with the Brigade Air Squadron for a little over a year since qualifying as a Scout pilot and during that busy time became an extremely well-liked and popular aircrew officer.
His popularity was well founded for he had made countless friends during his brief career by a combination of warm personality and a keen sense of humour which stood out even through the most arduous and demanding conditions.
Richard entered the Corps as a member of Y074 batch and from training joined 40 Commando where he served as a troop commander including a short period as LO(G) to Brig Moore, and later as a Company Second in 'Command.
From 40 Commando he greatly enjoyed a tour as OCRM to HMS Gurkha and developed a love for the sea and water sports which he pursued whenever he could.
A naturally gifted and intelligent officer, Richard left HMS Gurkha for the Lieutenants' Greenwich course where he was awarded the prize for the best course student and then went on to attend pilot training at the AACC Middle Wallop following in his elder brother's footsteps and so creating a unique 'double' in RM aviation history.
After receiving his 'wings' and qualifying on Scouts, Richard joined the Air Squadron at Coy pool in May 1981 and quickly settled to become a sound and competent pilot.
Once again his flair for achievement was quickly realised and through numerous exercises and deployments became a very capable and valued Flight Second in Command and his unselfish attitude, enthusiasm for flying and dedication to his work were an example to us all.
Richard tragically lost his life during active service when attempting to extract casualties from the front line during the battle for Darwin and Goose Green. We all mourn a very fine officer whose loss will be particularly felt among those of us privileged to know him. To his parents, family and relatives we extend our deepest sympathy. N.J.P.
Sources
AFM ROH
London Gazette 49134, page 12838.
[Image] South Atlantic Medal Association website.
Primary Roll of Honour:
'Roll of Honour since 1946'
Archive pages :
RM Commandos 1946 - present
3 Cdo. Bde. Air Sqn / Helicopter Force
Falklands