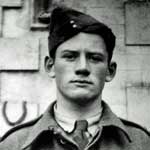 Lieutenant Richard Morgan, 2 Troop, was Mentioned in Despatches in recognition of gallant and distinguished service on 28 March 1942 during Operation Chariot at St. Nazaire.
Embarking on Motor Launch ML262 he commanded a small protection party and was captured after the raid [1][2][2a][2b][3].
Recommendation
"During the run in, under intense fire, Lieut, Morgan manned a Bren Gun in an exposed position on his motor launch, firing his gun with devastating results on the enemy gun positions and searchlights.
On landing he led his men with great determination although under heavy fire from enemy gun positions on the roof of the Submarine Bunker which made it impossible to advance to his objective. He got his men back safely to the motor launch, himself carrying a mortally wounded Sergeant, and then attempted to make another landing in an alternative place.
During the run in to this second attempt, his motor launch received a direct hit and was blown up. Under continuous fire, and on a burning ship, he transferred his wounded on to floats before himself abandoning ship.
Showing tremendous coolness and complete disregard for his own safety, he succeeded in getting most of his men ashore by swimming, and was thus personally responsible for saving many of their lives" [2].
Sources
[1] London Gazette 37162, page 3494.
[2] National Archives file WO373/46/290.
[2a] Prisoners of War 1715-1945 / National Archives file WO392/1 and 11.
[2b] German Record Cards for British POWs / National Archives file WO416/261/390.
[3] St Nazaire Society 75th anniversary newsletter.
[4] London Gazette 38288, page 2921.
[5] London Gazette 39787, page 1150.
[6] London Gazette 46188, page 848.
Photo of Commando in Gallery:
Yes
Archive pages :
No 2 Commando
No 4 Independent Company
St. Nazaire Commandos
Prisoners of War