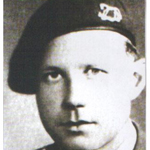 Captain Philip Pinckney was executed whilst a prisoner of war. At the time he was serving with 2 SAS and had been captured on Operation Speedwell after parachuting with 6 others into Bologna, Italy. The aim of the operation was to disrupt enemy railway movements.

In the book Special Air Service by Philip Warner the author writes "After serving in Sicily he was parachuted on to the Brenner Pass. There, after he had blown up a railway tunnel, he was captured and shot by the Gestapo."

Extract (with permission) from the Pinckney family Tree.   John Pinckney writes " He died on 7 Sep 1943 at Baigno, Italy, aged 28. On 10th July 1943 the S.A.S. went into action in Sicily ahead of the invading armies of the Allies. For fifteen days they marauded behind the German lines. On the German withdrawal to the Italian mainland, the S.A.S. went back to Africa to refit themselves for the next stage. This took the form of landing in Northern Italy to disrupt communications. In September 1943, Philip and six of his men were dropped by parachute near Bologna. Philip was loaded up with several million lira which he was to deliver to the partisans assisting us in German-held territory. He had at this time a cracked spine which was being treated, but he insisted on going with his men, and overruled the doctor who tried to stop him, and who in the end had to apply freezing mixture to deaden the pain. On the night of 7th September they flew out.

Lance-Sergeant Stokes, writing afterwards, described the scene, "He jumped first and I second. I heard his old familiar bellow and saw him vanish through the aperture and I followed hard on his heels. It was a nice night and I could see everyone clearly - just before we landed I swung out of line and started to drift away and the Captain yelled to me: 'Watch your drift, Stokes, watch your drift.' I hollered back: 'O.K., sir.' I then saw him half wave his arm in acknowledgement. That's the last I saw of him as my drift continued, and a few seconds later I landed smack into a house in an Eyetie village. We all got together except for the Captain, and against orders spent an hour and a half looking for him.... There is no doubt at all in my mind that his back gave way when he landed."

John Pinckney continues, "Thus injured, Philip didn't stand a chance. He was captured, so local sources stated, and shot, in spite of his uniform, the same day by Italian Carabinieri, and buried at Baigno. On 22nd February 1945 he was reburied in the British Military Cemetery at Florence. All his men returned safely to base after six weeks behind the enemy lines"

Extracts from "The Memories of Sgt John Huntington" on our own website
"The other section was commanded by the best Officer, man and gentleman who I have ever met in my life, no matter where I went he was Lt. Philip Pinckney."
and
"Lt. P H Pinckney took command of ‘E’ Troop as Capt. He was the finest officer gentleman and leader I have ever come across during my lifetime. He once refused to be decorated unless every member of the troop on that certain operation received the same medal. Needless to say his request was turned down. Capt. Pinckney never received his medal. He was killed (murdered) on an SAS operation in Bologna in Northern Italy in 1944."

An entry in Commando Association Newsletter 12 of March 1951 adds "On Saturday, the 9th December last, thirty-seven members of No 12 Commando 'E' Troop came together for the first time since the unit was disbanded. This Reunion which took place at the Surrey Tavern, Surrey Street, London, was held jointly under the chairmanship of Colonel Robert Henriques, who was a former Troop Leader, and Mr. R. Gresham Cooke, who is the brother-in-law of the late Captain Philip Pinckney who was also a Troop Leader. Captain Pinckney was shot as a prisoner-of-war in Italy in 1943 when a member of the S.A.S., after being dropped by parachute behind the enemy lines near Bologna. He left a considerable part of his estate for the benefit of the members of his Troop to set them up in civil life after the war. His brother-in-law, Mr. Cooke, has been administering this, and some 30 or 40 men out of the Troop have been helped in various ways."