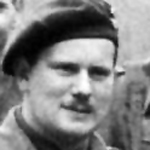 Peter Ian Bartholomew served in No 12 Commando until their disbandment when he moved to No 3 Commando. He participated in the D Day landings as Captain of 2 troop.  On the Commando's return to NW Europe from the UK in 1945, he took command of No 3 Commando with the rank of Acting Lieutenant Colonel.
Henry Brown OBE, the Secretary of the Commando Association, wrote this obituary which was published in their Newsletter 90 of March 1990:
"There is no doubt that in the passing away on 24th October last of Peter Bartholomew, our movement lost a very staunch and faithful supporter.
After service in No. 12 Commando, Peter served with distinction in No. 3 Commando and was in fact the unit's last Commanding Officer prior to disbandment.
After the war, his deep interest in the activities of our Association, and in the general welfare of comrades and their dependants, was well known to all, and was so clearly shown during his Presidency of the Association during the period 1966 - 68, and in- later years as Chairman of the Commandos' Beievolent Fund Trustees.
Peter always had a particularly caring interest in his men, and this carried on in civilian life through his close contact with many comrades resident in the West Country. It did not diminish in recent times when, sadly, he was not enjoying the best of health. We deeply mourn the loss of a good friend and great supporter of our Commando cause. HB."
Photo of Commando in Gallery:
Yes
Archive pages :
No 12 Commando
No 3 Commando
‹ YOUNG, Peter up 3 Commando Nominal Roll ›