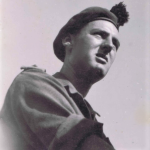 Captain Paul Bassett-Wilson MC died during operations with No.9 Commando at Lake Comacchio, Italy [1].
A former pupil of Stowe School and student at Trinity College [2], he had earlier served as a Lieutenant in No.12 Commando.
Recommendation
Ref Map - Italy -1/25,000 Sheet 158 IV SE.
"On night 3/4 Mar'44 this Officer led a recce patrol 1000 yds into the enemy lines in order to recce Boche positions which might be succesfully attacked by a fighting patrol. The following night he led an attack on a Boche HQ which he had located the night before. Both these patrols were carried out under most hazardous circumstances, as they had to be done in broad moonlight, over dead flat country which was covered by enemy fixed LMG positions, and through areas which were known to be sown with our own and enemy uncharted mines.
In spite of these difficulties this Officer led the fighting patrol onto the objective in a most determined and gallant manner. with the result that the Boche HQ was thoroughly beaten up, and a prisoner captured in the final assault. The prisoner captured was of particular value as no prisoner had been captured from this particular part of the line before. During the withdrawal of the fighting patrol it was continuously engaed by enemy LMGs while crossing open country and suffered casualties. Lieut. Bassett-Wilson however ensured that the prisoner was taken to our own lines and remained to the last until all casualties had been evacuated to our lines.
The success of these patrols may be attributed to the very high standard of leadership of the officer who displayed great courage and determination in a very hazardous action." [Recommended by Lt. Col. R.J.F. Tod, Officer Commanding No.9 Commando.]
Sources
[1] CWGC
[2] Trinity College Chapel records.
[3] St Nazaire Society website.
[4] No.12 Commando War Diary.
[5] London Gazette 36615, page 3375.
[6] National Archives file WO373/6/496.
[Image] From the Memoirs of Maj. Peter Bolton MBE, No.9 Cdo., courtesy of his daughter Kim.
Primary Roll of Honour:
9 Cdo. Roll of Honour
Photo of Commando in Gallery:
Yes
Photo of grave in Gallery:
Yes
Archive pages :
No 12 Commando
No 9 Commando
St. Nazaire Commandos