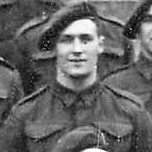 Norman Aukett, a former lorry driver from North Kensington, served in 2 Troop. Post war Norman and his wife Sheila resided in South Australia. Norman was an active member of the Commando Association returning for several reunions. He was also an early member of the St Nazaire Society. Sheila died in 1995 [1][2][5].
Norman Aukett was reported missing 28 March 1942 (St Nazaire Raid) [1].
The missing report was later cancelled. Back in UK [1].
Served in 2 Troop before the raid [2][2a].
Function and Party on the raid is not known [2].
December 1942 serving in 2 Troop [3].
October 1949 elected to the Committee of the St Nazaire Society [2][4].
Assumed the role of Secretary London area St Nazaire Society from Eric de la Torre [2][4].
Member of the Commando Association [5].
2 January 1963 arrived Fremantle Australia, after emigrating with his family [6].
1966 residing Adelaide, South Australia [5].
1981 attended the 35th Annual Reunion in the UK of the Commando Association [5].
1982 attended the 40th Anniversary of the raid on the Royal Yacht [5].
His death in Australia was announced in Commando Association newsletter 119.
Sources
[1] National Archives files WO417/77 ( 2 records).
[2] James Dorrian and Ann Mitchell, St Nazaire Society.
[2a] Notebook of Captain Birney OC 2 Troop kia St Nazaire.
[3] CVA Gallery image of No.2 Commando 2 Troop Dec. 1942.
[4] St Nazaire Society newsletters 7, 9, and 11.
[5] Several Commando Association newsletters including 42, 63, 73, 75, and Obituaries in 119.
[6] Passenger Lists for the SS Strathmore / National Archives of Australia online series K269 item 30147748.
Photo on Find A Grave of headstone at joint grave at Yankalilla Anglican Cemetery, Yankalilla, South Australia.
Linked content:
'Operation Chariot'
Photo of Commando in Gallery:
Yes
Archive pages :
No 2 Commando
St. Nazaire Commandos