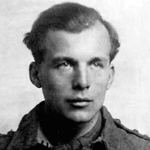 Captain Michael Burn, 6 troop, was awarded the Military Cross  for gallant and distinguished service during Operation Chariot, the raid at St Nazaire 28 March 1942. He was in charge of the commando contingent on board motor launch ML 192. Reported missing after the raid, later found to be a prisoner of war.
Recommendation
"On 28 March 1942, during the Commando Raid at St. Nazaire, France, Captain Burn was in command of an Assault Group.
Following a direct hit on the motor launch carrying his Group, the ship was put out of action and most of his Assault Group were killed or wounded. Capt. Burn, after being nearly drowned and pulled ashore by one of his men, quickly recovered and proceeded alone to his objective after ascertaining that these gun positions were not in action.
Entirely alone he carried out the destruction of these positions, setting them on fire with incendiaries. He continued causing enemy casualties with hand grenades until all his ammunition was expended, when he was taken prisoner.
This action of Capt Burn's showed his determination to carry out his task although his men were out of action; his courage and initiative being an example deserving the highest praise.
Sources
London Gazette 37162, page 3493.
Award Recommendations / National Archives file WO373/46/266.
St Nazaire Society website.
Casualty Lists  / National Archives file WO417/3.
Prisoners of War  /National Archives file WO392/1.
Photo of Commando in Gallery:
Yes
Archive pages :
No 2 Commando
St. Nazaire Commandos
Prisoners of War