BUCKMASTER, Eric, Memories of No 2 Commando 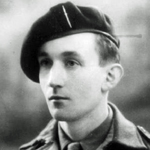 Over the last few years Eric Buckmaster, No 2 Commando, has been a wonderful help to this Archive by providing information in response to our many questions, not only about those who served with him in No 2 Commando 5 troop, but also in providing other more general information about events and places.
Eric served alongside his brother Stanley Buckmaster [more...] in 5 troop. Here are some extracts from a few of his responses.
Joining No 2 Commando 5 troop
"The majority of the key members of 5 Troop came from Liverpool, Birkenhead, and Warrington. It was known as the Scottish Troop, because initially it had a large contingent of Liverpool Scottish, plus members of other Scottish Regiments.
Although I am a Cockney from the East End of London, I got into 5 Troop because I was part of the intake trained to replace those lost at St Nazaire, March 1942. The RSM asked for all Scotsmen to step forward. There were only 6 men in that intake who qualified, but he wanted 7 so he asked for a volunteer, and that is how I got in.
After Salerno when again we needed replacements, my younger Brother Stanley joined us, he had been through the North Africa Campaign, and stayed with me in 5 Troop for the remainder of the War."
No 2 Commando cap badge.
"When 2 Commando was first formed the Tam O' Shanter was our Unit headgear. When I joined them mid 1942 after St Nazaire, that is what I wore initially. However the CO had adopted the Fighting Knife as a standard hat badge, and we had shoulder flashes which were the Fighting Knife with SS on either side of it. We were issued the Flashes, but the hat badges were not at that time on issue, they had to be made by ourselves.
I joined 2 Commando very late one night in Boscombe, Bournemouth. When I got to my billet I was met by one of the lads from HQ Troop, who showed me to my room, gave me my Tam O'Shanter, and also gave me a teaspoon and said you can make your hat badge out of that. We had to file the fighting knife badge out of the teaspoon with a nail file. We sewed them on to our hats with a loop of cotton round the handle, and another loop under the haft. Some time later they actually issued the hat badges as a general supply for 2 Commando."
Driving Trains and Mining in Ayr
"As part of our Training whilst in Ayr, some of us were sent to drive trains, some of us were sent down coal mines. I was sent down the Auchencruive Pit in Ayrshire which ran some 2 miles under the sea. A long part of the tunnel was no more than 4’ 6” high due to the presence of a long seam of hard “ Whin Stone ”. How men were able to traverse that each day before starting work I don’t know."
Exercise on board HMS Keren.
"There is a photo headed No 2 Boys on HMS Keren. 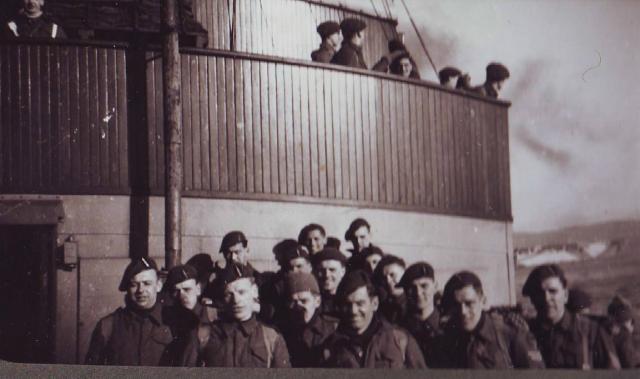 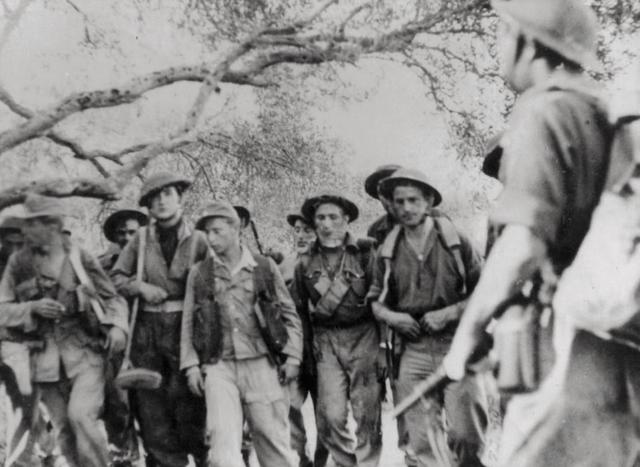 "The Commando between the 2 prisoners on the left is my brother Stanley, so 5 Troop were involved here although I cannot immediately remember the names and faces of the other lads present. I must be somewhere around that group, because Stanley was No 2 on my Bren Gun, and he’s carrying his rifle in that picture. We were moving down towards the Harbour, so that our Landing Craft could come round from our up coast landing spot, to pick us up more easily.
Spilje is the place where each Troop was given a different location to attack . Ours was a steep hill with German slit trenches all across the top. We came ashore in the early hours of the morning and moved in some distance across country, and then we just sat and waited for dawn. The Germans must have been rather Jittery because all the time they were firing tracer bullets on fixed lines. When it started to get light, we climbed through some barbed wire, and then ran up that hill so fast that we literally overan the German positions and Capt. Turner was reduced to calling “ Come back Five ”. That became a subsequent “Battle Cry ” for 5 Troop,  “ Come Back Five ”.
No 2 Commando did take casualties during the operation.
"The Germans were more concerned to know if we were Partisans or Englander. The Partisans did not usually treat them very well.  A few of them who had tried to run away had been shot.
With regard to the prisoners themselves in this picture, it was common practice to make them carry the heavy stuff that we had toted into battle. Any spare mortar bombs, our Bren Jackets and anything else that could be safely loaded on to them.  There were no Partisans with us at this time.
The Bren Jacket was in itself a heavy garment and with it 8 bren magazines, each Mag. contained 28 x .303 rounds of ammunition. In addition the No.1 man carried his Colt 45, plus the weight of 50 rounds for that. The Nos. 2 & 3 in the Bren Team, in addition to the Bren Jacket and their 8 Magazines of .303, carried their Rifles, Bayonnets and 100 rounds of .303 ammunition for that in clips and bandoliers which you can see in the Picture.
Some Troop members would be carrying the 2’’ Mortar, its Base plus supply of Bombs, and the 'Piat Man' would be similarly loaded. You can understand why, after the exertion of the activity, and certainly in the warmer weather it was felt appropriate to make the Prisoners carry the load.
In the Infantry Troops we thought we had our share of the weight to be carried, but spare a thought for the members of the Heavy Weapons Troop, who carried 3’’ Mortars, Base Plates, & Tripods, plus enough bombs for a battle, and Vickers Machine Guns, and loaded ammunition cylinders."
Communication and Cigarettes
"Unless one was say in the Orderly Room, and perhaps had access to a typewriter, all letters would have been hand written. Letters posted home were always censored by each Troop CO.  There was an Army Newspaper called the ‘8th Army News’, but afterwards this became ‘ The Crusader ’. I imagine because both the 1st & 8th Armies were engaged in the action at that time.
In case you do not know, the Vs… referred to were our Weekly free issue of 50 cigarettes. The name was “ Victory Vs ”. They came from the NAAFI, but did not arrive every week, some times they were up to a month late.
When we first joined the 8th Army they were called ‘Cape to Cairo’ the label pictured a Camel, and it was said that’s where they came from ‘the Camel’. But as we proceeded through Sicily & Italy the name changed. ( I didn’t smoke, so was not much affected by the quality )."
Preparations for Japan
We arrived home late June, early July 1945, and I was sent down to St Ives in Cornwall, to attend a “ Surf Landing Boating Course ” at the Commando School for Boating and Cliff Climbing. The Japanese War was still in progress and we were being regrouped to be sent Far East.
It was said that there were not many natural Harbours available out there and we had to be prepared to make Surf Landings. It seems that opposite the town of St. Ives, the beaches develop the highest level of surf around the UK. When the Local fishermen were coming in because rough weather was expected, we would set out. We used Canadian Dory’s which are sharp at both ends ( shades of Moby Dick ). Eight men rowing and one man with a sweep to steer.
The drill was to row into the shore keeping the Boat at strict right Angles to the shore. When we reached the actual surf, the rowers turned about face and adopted a rowing out stance. And held on. The surf would pick the boat up and carry it in. If we did it right the boat would ride in on a high wave and be deposited squarely on the beach. If the angle was slightly out the boat and rowers ended up in a heap under water, with the boat up around your ears.
Another factor was the very thick sea mists that can occur down there even on August Bank Holiday and before. We spent hours learning to steer by compass out at sea in very thick mist, with visibility nil."

Service after the War
"After the war Jack Payne, my brother Stanley, and I,  all enlisted in the London (TA) 10th Battalion Parachute Regiment, and spent 6 years jumping out of aeroplanes and balloons. I may have mentioned that we had done an initial Parachute Course on our return from Yugoslavia, at a place named Gioia del Colle, which means Happiness on the Hill.

We were in number 3 Company, based at Dagenham Essex.  Jack Payne persuaded us to make up a Company Boxing Team, and we won the Inter Company Trophy, 5 years running, so they gave it to us and set up another Trophy."

Many thanks to Eric for sharing his memories with us. Eric died on the 16th May 2020.
(First uploaded to Archive October 2016, updated May 2020.)
Linked Content:
BUCKMASTER, Eric Henry
BUCKMASTER, Stanley Owen
Archive pages:
No 2 Commando
‹ No 2 Commando decorations and awards from April 1943 up DIXON, Herbert, Memories of No 2 Commando ›