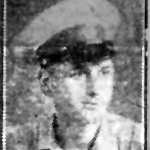 Marine Maurice Fantham died in Italy on 13 October 1944 from wounds he had received 3 days earlier. A serving Police Officer he had volunteered for the Commandos as part of the Police Intakes.
He is amongst those named on the WW2 Birmingham City Police Memorial located at West Midlands Police HQ, Lloyd House, Colmore Circus, Queensway, Birmingham.
Extract from the Leamington Spa Courier - Friday 03 November 1944
"Miss M. Fantham. sister of Marine Maurice Fantham, 16 East Grove, Leamington, has been officially Informed that he died of wounds on October 13th (13 days before his 23rd birthday) at a casualty station in the Central Mediterranean area. On October 8th, only two days before he was wounded, he wrote a cheerful note home saying he was "on a job” and ending: Think of me at night, no blanket, shivering and possibly wet." The Matron of the casualty station, wrote that he made an excellent patient.
Until 1940 Marine Fantham was a clerk In the local police offices. He then became a constable in the Birmingham Police Force, and In 1942 Joined the Royal Marines and was sent to Catania in July, 1943. About two months ago he volunteered for the Commandos (Signals).
Educated at Warwick School (1931-38). he was captain of the Junior House, and later a member of the Ist XV rugger team. For some years he was choir boy and server at St. John’s Church, Leamington."
Sources
CWGC.
Registers of Reports of Deaths - Naval Ratings / National Archives file ADM 104/130.
Image: © Johnston Press plc. / Leamington Spa Courier - Friday 03 November 1944
British Newspaper Archive (website britishnewspaperarchive.co.uk); The British Library Board.
Image of the Birmingham City Police War Memorial held at the IWM ref. 88114.
Primary Roll of Honour:
40RM Cdo. Roll of Honour
Archive pages :
40RM Commando