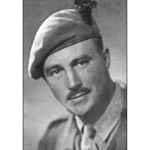 Leslie Stuart Callf was appointed Lieutenant on the 4th July 1940 [1].  Soon after he volunteered for the Commandos and was subsequently attached to No. 9 Commando.
He was awarded the MC in recognition of gallant and distinguished service in Italy in March 1944 [2], and a subsequent bar to his MC for his gallantry during the period of November 1943 and March 1944 whilst Captain of 5 Troop [3].  He wrote a short account of one of those actions which took place at Anzio on the 3rd March 1944 [read account].
Post war Major Callf MC was active in Association events both in the UK and at services and events in Europe. He was appointed Vice President of the Commando Association in September 1984 [4].
In Sept. 1985 Major Callf MC and fellow No. 9 Commandos, Les Hopkins, DCM [view], Tom Bostock MM [view],  and Dave Belasco, returned to Italy and built a permanent monument in the form of a large cairn [view images] on the actual battlefield at Monte Ornito and Faito, near the area where No. 9 suffered over 50 per cent casualties on February 3, 1944 [5].
On the 13th June 1986 Major Callf, MC, was appointed President of the Commando Association [6].
Sources
[1] London Gazettes Supp. 34888, page 4085.
[2] London Gazettes Supp. 36615, page 3375.
[3] London Gazettes Supp. 36710, page 4369.
[4] ommando Association newsletter 79.
[5] Commando Association newsletter 82.
[6] Commando Association newsletter 83.
Photo of Commando in Gallery:
Yes
Archive pages :
No 9 Commando