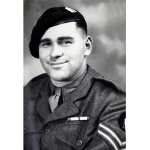 Kurt Theodor Goldschlager being of the Jewish Faith served under the alias of Kenneth Edward Clarke. Born in Vienna, Austria he was one of four brothers, Kurt, Erich, Paul, and Robert. Their father Julius was an architect, who died of natural causes in 1940, and their mother was Irene, nee Von Mangold, who was transported from Izbica, Poland, to Auschwitz and murdered there.
In the 1930’s Kurt had been a member of the Austrian National Swimming and Water Polo teams. He entered the United Kingdom in 1939 after fleeing the Nazi oppression in his own country [1][1a][2][3][3a]
Service [2][2a][4][4a]
29 January 1940 entered service with the Pioneer Corps.
17 January to 24 October 1943 (Private) attached to No.10 Commando.
25 October 1943 to February 1945 Pioneer Corps.
February to June 1945 (Corporal) attached to the 1st Commando Brigade.
June 1945 attached to the Holding Operational Commando (HOC) at Wrexham.
1945 Mentioned in Despatches in recognition of gallant and distinguished service in North West Europe [4][7].
Unit
3 Troop of No.10 (Inter Allied) Commando consisted primarily of German speaking refugees most being of Jewish Faith and this is likely to have been his first attachment. They never operated as a full troop and members were attached to various units at different times based on language skills and operational requirements. At Osnabruck in 1945 he was with No.10 (Inter Allied) Commando 2 Troop 'Dutch', which was part of the 1st Commando Brigade. [7].
Post war
Kurt ran a ladies tailoring business in Harrow Road, London, which failed, and so he moved to Manchester. He never married. In 1977 he was a victim of a robbery and died from a fractured skull at Ancoats Hospital, Manchester, on 6 May 1977 [5]. He was buried in a pauper’s grave with no name marker, in the Roman Catholic section, at Southern cemetery in Chorlton, Grave Section I, plot no.1563 [6]. Nobody was aware he was Jewish or had family in the USA.
Gone but not forgotten
In 2021, during her own research, Kurt’s American niece Tracy Fish (nee Gordon, daughter of his brother Paul) from San Diego, California, began making enquiries of representative groups in the United Kingdom regarding her Uncle Kurt.
With the help of Martin Sugarman, Archivist, of the Association of Jewish Ex Servicemen and Women, funding was obtained from Jerry Klinger, President of the Jewish American Society for Historic Preservation, for a headstone with Kurt’s name to be placed upon his unmarked grave and also a larger headstone placed in the nearby Jewish cemetery, which explains who Kurt was and how his grave location, once unknown, can now be found [Linked Content below].
Sources
[1] Copy of Birth Certificate provided by his niece Tracy Fish.
[1a] Home Office Alien Exemption from Internment Certificate dated 17 Nov. 1939 / National Archives file HO396/28.
[2] Tracy Fish, niece.
[2a] Application for Certificate of Naturalization (granted 29 May 1947) / National Archives file HO334/177/25739.
[3] Naturalization published London Gazette 38019, page 3339.
[3a] The 1939 Register.
[4] MiD / London Gazette 37340, page 5454
[4a] Obituaries in Commando Association newsletter 66 dated March 1978.
[5] Death Certificate in possession of his niece Tracy Fish.
[6] Photo of original grave in Gallery from his niece Tracy Fish.
[7] 'The King’s Own Loyal Enemy Aliens', author Peter Leighton-Langer and 'Ten Commando' author Ian Dear.
[Images and copy of source 2a] His niece Tracy Fish.
Linked Content below from Martin Sugarman , AJEX Archivist.
Notes
Linked content:
GOLDSCHLAGER - Lost Grave of Jewish Hero
Photo of Commando in Gallery:
Yes
Photo of grave in Gallery:
Yes
Archive pages :
No 10 Commando
No 10 (IA) Commando 3 troop ('X' troop)
1 Special Service / Commando Brigade
Holding Operational Commando