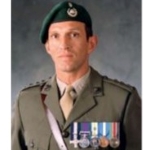 Lieutenant Keith Mills was awarded the Distinguished Service Cross for operations in the South Atlantic during the defence of South Georgia.
Citation
Lieutenant Mills was the Commanding Officer of a 22- man Royal Marines contingent despatched to South Georgia on 31st March 1982 to monitor the activities of a group of Argentines illegally landed on the island and to protect a British Antarctic Survey Team based there.
On 3rd April 1982 a major Argentine assault began on the island and, following his unsuccessful attempts to forestall the attack by negotiation, Lieutenant Mills conducted a valiant defence in the face of overwhelming odds. In spite of the fact that his unit was impossibly outnumbered, extensive damage was inflicted on the Argentine corvette Guerrico, one helicopter was shot down and another damaged.
Only when the detachment was completely surrounded, and it was obvious that further resistance would serve no purpose, did he order a ceasefire, placing himself at great personal risk to convey this fact to the invading forces.
Lieutenant Mill's resolute leadership during this action reflected the finest traditions of the Corps.
Source
London Gazette 48999, page 7422.
Archive pages :
RM Commandos 1946 - present
Falklands