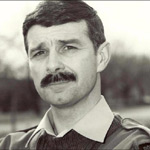 Sergeant Joseph Desmond Wassall, from Shifnal, Shropshire, was awarded the Military Medal in recognition of distinguished service on the Falkland Islands [1+2].
London Gazettes
Sergeant Wassall commanded a four man team in the Mountain and Arctic Warfare Cadre. His quiet and steadfast leadership and professionalism led him to be selected for several particularly hazardous missions culminating in an operation in conjunction with Lieutenant Haddow's team on Goat Ridge while it was still in the hands of the enemy. He led his team on a detailed night reconnaissance patrol and then lay up for 24 hours, at times within a few feet of the enemy. He produced a detailed map listing the size and location of the enemy position which was later used to very good effect. Whilst in this area Sergeant Wassall also directed and controlled artillery fire to within 20 metres of his own men, causing considerable damage to the enemy. Two nights later he returned to Goat Ridge and led the 1st Battalion 7th Gurkha Rifles in their move forward to assault Mount William. Sergeant Wassall set an example of courage in the face of the enemy and the elements that was an inspiration to all [1].
Source
[1] London Gazettes Supp. 49134, page 12840.
[2] National Archives file WO373/188/183
[3] London Gazette Supp. 52767, page 5.
Obituary in The Scotsman newspaper 9/11/2016.
[Image] The Scotsman newspaper.
Notes
Surname originally written in LG @ [1] above as WASSELL.  Actual citation (not the file title) shown @ [2] above shows WASSALL as does {3] above and his Obituary.
Archive pages :
RM Commandos 1946 - present
42 Commando RM
45 Commando RM
Falklands