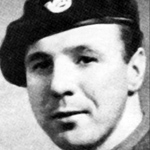 Corporal John Dowling was awarded the Military Medal for gallant and distinguished service, during which he was wounded, at Agnone, Sicily, and the bridge at Malati (3 Commando Bridge).  He was later wounded serving with 3 Troop on 7 June 1944 at Normandy, France.
Recommendation
"On the night of the 13th-14th July 1943 at Agnone, Cpl. Dowling exposed himself fearlessly in the final stages of the invasion of the landing craft while manning a Vickers K Gun. He fired many magazines and accurately directed fire at enemy pill boxes. On arrival at Punte Del Malati with his section, he rushed and captured a pill box being wounded during this assault. He continued to operate cheerfully and efficiently showing fine leadership during the disturbance."

In December 1942 he participated in a boxing and milling tournament against No 4 Commando at Weymouth, and in March 1943 took part in the Garrison tournaments whilst the Commando were on Gibraltar.