3 Commando at Sicily and Malati Bridge’

On the 12th July 1943, two days after taking part in the invasion of Sicily,  No.3 Commando re-embarked on board the Prince Albert commando carrier at Syracuse to prepare for a second attack. This time they were tasked with taking and holding the Malati Bridge near Lentini, ten miles behind enemy lines and  five miles inland from the sea. They were to hold it until the arrival of the 50th Division.

They landed at a beach near Agnone about 20 miles north west of Syracuse. After capturing the bridge from the Italians and removing the demolitions they had laid, a counter attack by the Germans with support of Tiger tanks inflicted heavy casualties on the exposed men of No.3 Commando. Eventually they were ordered to withdraw but the bridge was saved from the demolition that the Germans had planned. After the fall of Catania, General Montgomery ordered that a stone be carved with “3 Commando Bridge” and this stone cemented into the Punta del Malati bridge

These recollections written by Lieut. John Channon Erskine, RE attached No 3 Commando, are provided to this Archive courtesy of his son Andrew Erskine. The original transcript is currently stored in the Australian War Memorial archives.

More can be read about the author here: Lieutenant John Channon Erskine RE.

Some recent photos of the bridge are in our gallery [view images].

Click on 'download' above, or read below.
Refresh/reload this page if the document does not display immediately above. 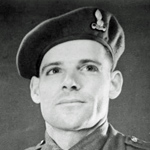