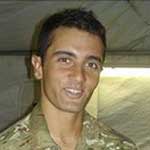 Lieutenant Jack Anrude, 40 Commando RM, was awarded the Military Cross for gallant and distinguished services in Afghanistan in 2010 [1].
Citation
Lt. Anrude led his troop out of Patrol Base Hanjar accompanying an Afghan Special Forces unit to speak with locals at a mosque.
He was leading the patrol through a complex and unfamiliar maze of alleyways, when, without warning, a gunman appeared from a doorway only metres away and unleashed a hail of automatic fire. He was hit twice, once in the head, striking his helmet and once in the arm, while two other patrol members, including an Afghan soldier, were seriously injured with neither man able to walk unaided.
Ignoring his own significant injuries, Lt. Anrude took immediate and decisive command of the situation and courageously led his troop out of the close alleyways and into open ground where the patrol quickly came under sustained and accurate fire from at least two separate enemy ambushes.
Without effective cover and with casualties, he chose to extract his patrol across two hundred metres of open ground.Leading by example, he picked up the injured Afghan soldier and, with bursts of accurate fire striking around him, carried the soldier to safety, pausing only to return fire [2].
Sources
[1] London Gazette 59737, page 5640.
[2] MOD press release 28 March 2011.
[3] London Gazette 59550, page 18234.
[4] London Gazette  61392, page 21041.
[5] London Gazette 63818, page 17754.
[Image] BBC local news online (Somerset) 3 August 2010.
Archive pages :
RM Commandos 1946 - present
40 Commando RM
Afghanistan