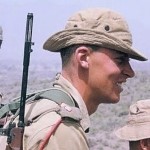 Lieutenant Ian Martin, a Troop Commander in 'Z' Company, was appointed M.B.E. (Military Division) in recognition of gallant and distinguished service in operations in the Radfan Area, Western Aden Protectorate, during the period 13 April to 15 October 1964 [1][1a].
Recommendation
"Lieutenant Martin was a troop commander in 'Z' Company. During the operations in the Radfan on 4th and 11th July, 1964, Martin led the way on two extremely difficult night marches, over ground with cliffs of as much as 250 feet on either side, and it was largely through his leadership, resourcefulness, and stamina, that the company reached its objective on time. Before the second march to re-occupy the Bakri Ridge, Martin had led two recce patrols on previous nights and though tired,  he again volunteered to lead the way. He took a small recce party on ahead, climbed a difficult cliff in pitch darkness, and put down ropes to bring up the rest of the company.
On 14th July 1964 his troop led the company in a daylight advance from Arnold's Spur to the Hajib feature. He spotted and stalked four dissidents and got within 150 yards of them by skilfull handling of his troop. Before he could capture them firing broke out from another group of dissidents. Unable to complete the capture of the first group he counter-attacked the new group, moving over open ground under accurate fire with great energy and determination, killing one of the dissidents wounding another and driving them out of a strong position. He then re-organised his troop and covered the withdrawal of another troop caught in an exposed position.
Throughout 1964 Martin has led his troop with great ability and determination, and made it the best in the Commando. He is a subaltern with character, intelligence and maturity beyond his years, and this has led to his selection, at the age of 21, to be second-in-command of a company". [Recommended by Lt. Col. T.M.P. Stevens RM, Commanding Officer].
Sources
[1] London Gazette 43636, page 4130.
[1a] National Archives file WO373/136/135.
[2] London Gazette 47264, page 8742.
[Image] Photographer Lieutenant Tim Ricketts RM; courtesy of Maj. Ian Martin MBE.
Photo of Commando in Gallery:
Yes
Archive pages :
RM Commandos 1946 - present
45 Commando RM
Aden, Radfan, South Arabia Federation