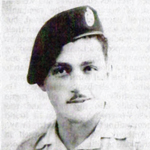 Corporal Ian Harris, born Hans Hajos, attached to No 10 (Inter Allied) Commando 3 troop ('X' troop), was awarded the Military Medal in recognition of gallant and distinguished service on 6 April 1945 during the crossing of the River Weser [1][2][4].
Recommendation
Crossing of River Weser-6th April 1945.
This NCO was the official interpreter with HQ 45 RM Commando during the attack launched by that Commando on the outer defences of Leese across the R. Weser on the afternoon of 6 Apr. 1945. Immediately it left the existing bridgehead the Commando came up against extremely heavy and accurate small arms fire from dug in enemy positions to the front and left flank. Owing to the flat nature of the ground the only line of advance was along the river bank but every inch of ground was bitterly contested.
Throughout Cpl Harris was always to the fore seeking for every opportunity to engage the enemy at close range with his Thompson Machine Carbine.
On one occasion the HQ found itself only five yards from three occupied enemy slit trenches up the river bank and on the other side of a hedge, and it was obvious that spontaneous action was necessary to save an awkward situation.
Immediately Cpl Harris climbed the bank and in full view of other enemy to his left flank fired his weapon at the enemy then at his feet, killing two and taking one prisoner. Before he could return to the cover of the bank again he was wounded by a burst of spandau fire from his left.
The courage of this NCO has seldom been surpassed and he undoubtedly saved the lives of several of his comrades by his spontaneous action. His unceasing determination to get at the enemy will always be an inspiration to all.
[Recommended by A.L. Blake, Lt. Col. 45RM Commando] [2].
Sources
[1] London Gazette 37172, page 3595.
[2] Award Recommendations / National Archives file WO373/
[3] Casualty Lists / National Archives file WO417/82.