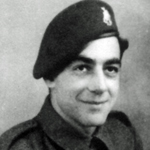 Hans Arenstein served under an alias of Harry Andrews. He was of the Jewish Faith and a member of 3 troop, also known as 'X' troop, of the inter allied commando.  He was attached to 47RM Commando at the time of his death.

Notes
2017: Reply from the CWGC after suggesting the date of death should be 11th, "According to the Royal Marine Commando Register the date of death is 10 August 1944 and this coincides with our earlier records, including the Burial Report and Graves Registration Report. Changes to the date were subsequently put in (manually), which has resulted in 11 August 1944. We will continue to record his date of death as 10 August 1944."
Jan 2021: Further message sent to CWGC with photo of headstone showing date as 11th.
Primary Roll of Honour:
10 Cdo Roll of Honour 'X' tp.
Photo of Commando in Gallery:
Yes
Archive pages :
47RM Commando
No 10 (IA) Commando 3 troop ('X' troop)