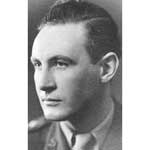 George Lane, born Lanyi, a Hungarian national of the Jewish Faith had been a freelance journalist before the war and came to England in 1935 aged 20. When war was declared he immediately attempted to join the Grenadier Guards.  After initially being served with a deportation order as a "friendly alien" this order was rescinded and he was permitted to join the Pioneer Corps. Subsequently he joined the Special Operations Executive but later declined to take part in SOE operations in Hungary and was released. From there he joined the Commandos.
Commissioned Second Lieutenant on 17 July 1943 he was awarded the Military Cross whilst attached to 3 Troop 10 (Inter Allied) Commando in recognition of gallant and distinguished service in North West Europe on 17/18 May 1944.
He was subsequently taken prisoner of war.
Recommendation
"This Officer was the raid commander of a military force which landed in the vicinity of Ault, on the North East coast of France on the night of 17/18 May 1944 to make a detailed reconnaissance of beach obstacles and mines, the nature and potentialities of which were unknown.
The operation was of the highest importance and was of an extremely hazardous nature, involving a two mile approach to a heavily defended enemy coastline.
The operation was attempted on three consecutive nights, the first two attempts having failed due to unsuitable weather, although on one occasion the enemy coast was actually sighted.
Despite the physical fatigue resulting from this, Lt. Lane, with superior seamanship, navigated his Dory to the selected landing point without error, although there were definite indications of the presence of enemy patrols in the area.
Having landed, Lt. Lane accompanied and gave material assistance to his sapper officer in obtaining a large part of the required intelligence. Having carried out a preliminary reconnaissance, this officer with the greatest determination set out again on a second reconnaissance with his sapper officer, having first ensured that arrangements had been made for getting the intelligence back to the parent M.T.B.
Shortly after leaving these officers were surprised whilst at work by an enemy patrol moving down the beach, and it is thought were captured. Although strictly speaking it was not part of this officer's duty to go any further than the landing point, he insisted with the greatest devotion to duty, in taking his share of the hazards of the operation, and by his tenacity of purpose assisted in obtaining vital information."
Sources
Commission
London Gazette 36186, page 4300.
Award
London Gazette 37284, page 4781.
National Archives file WO373/95/794.
IWM Interview with George Lane
3 tape recorded interviews at IWM catalogue number 13307.
Obituary
Daily Telegraph 26 March 2010.
Notes
In the Obituary above his birthname is shown as Dyuri Lanyi, however London Gazette 37694 dated 20 August 1946 shows "Lane, George (formerly Gyorgy Lanyi); Hungary; Farmer; Ashton Wold, Oundle, Peterborough, Northamptonshire.  10 July, 1946." This is also referenced on his naturalisation certificate in National Archives file HO334/163/18578 dated 4 July 1946.
Photo of Commando in Gallery:
Yes
Archive pages :
No 10 Commando
No 10 (IA) Commando 3 troop ('X' troop)