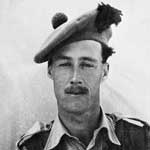 Lieutenant George Duncan served No 11 Commando and Layforce before moving to the Special Boat Section as a Temporary Captain. He was awarded the Military Cross in recognition of gallant and distinguished services in the Middle East [1].
Citation.
"Captain Duncan, with two other British N.C.O.'s of the Special Boat Section carried out an attack on Kastelli Aerodrome, Crete, on the night of 9/10 June 1942. They left their hideout on the beach at 1900hrs on 6th June and returned at 0530hrs on 13th June after a difficult and hazardous march through enemy occupied territory and a successful attack on their objective.
Their bag amounted to 7 aircraft, 210 - 60 gallon drums of petrol, 6 transport vehicles, 3 bomb dumps and 1 large oil fuel dump. Fires and explosions are also believed to have caused 70 casualties to German personnel on the aerodrome.
The success of the attack was due to the courage, resourcefulness and good leadership of Captain Duncan" [1A].
He was later awarded a Bar to the Military Cross in recognition of gallant and distinguished services in Sicily [2].
Citation
"In support of the vital convoy due at Malta from Gibraltar in mid August 1942 a commando raid was planned to destroy Junkers 88 bombers on Catania Aerodrome, Sicily. Three officers and three other ranks landed on the night of August 11th-12th in poor weather conditions on a defended beach.
The party penetrated to the airfield to find armed sentries on every aircraft. After reconnoitering for four hours they were detected but whilst retiring used their explosives to destroy some electric power pylons. During the withdrawal to the beach Sergeant Dunbar was wounded and taken prisoner.
The remaining five were unable to find UNA* at the rendezvous and one canoe capsized. They were taken prisoner after daylight some five miles out to sea.
Duncan was in command of this raid which was carried out with great determination and courage. Although the objective was not achived due to the enemy's exceptional precautions. the boldness and iniative shown are considered most worthy of recognition" [2A].
Two months later he escaped from Camp PG21, Chiete, Italy  but was recaptured and later imprisoned at Camp PG5 at Gavi, Italy. He unsuccessfully attempted to escape from the train when the prisoners at Camp 5 were being transferred to Germany in September 1943.
On arrival at a transit camp in Austria, Captain Duncan avoided registration and hid for 13 days after which he escaped but was caught 3 days later and transferred to Oflag 79. He later received a Mention in Despatches [3][3A].
The death of Captain George Duncan M.C. of Annan, Dumfriesshire, was reported in the Obituaries of Commando Association newsletter 42 issued March 1966.
Sources
[1] London Gazette 35771, page 4795.
[1b] National Archives file WO373/46/23.
[2] London Gazette 37536, page 1950.
[2A] National Archives file WO373/101/482.
[3] London Gazette 37450, page 750.
[3A] National Archives file WO373/100/933.
POW files WO392/1 and WO/392/11 WO392/21.
[Image] © NMS/2012 National Museum Scotland.
Notes
*H.M.S. UNA was a British submarine.
Photo of Commando in Gallery:
Yes
Archive pages :
No 11 Commando
Layforce
Special Boat Section/Squadron/Service
Prisoners of War