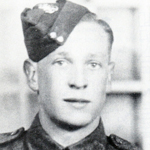 Troop Sergeant Major George Haines, 5 troop, was awarded the Distinguished Conduct Medal for his gallantry during the raid at St Nazaire [1].
Recommendation
On 28 March, 1942 during the raid on St. Nazaire, when the Officer-in-Command of the Headquarters' Reserve failed to make a landing, TSM Haines took command of this Group in his place. When his party arrived at the Operational Headquarters the area was under intense fire from enemy gun positions sited on the roof of a U-boat shelter under 70 yards away. With complete disregard of his own safety TSM Haines took up a position in the open, engaged and silenced these enemy guns with a 2" mortar.
Shortly after this, the Headquarters Group came under enemy machine gun fire from an armed trawler inside the inner dock. Again from the open, TSM Haines engaged the new enemy, this time with an LMG. His fire caused the enemy craft to move further up the dock. This reduced the danger in the immediate area and gave the Headquarters freedom to operate.
After the attempt to re-embark had been abandoned, TSM Haines played a splendid part in a running engagement which lasted over half an hour, and in which the force fought its way to the inner dock and across the bridge into the town.
The bridge itself was covered by enemy LMG fire but TSM Haines made a determined dash across the bridge and into the direct fire of the enemy weapons. Under his leadership his party managed to silence most of these gun positions, thus enabling the main force to proceed.
During the remainder of the action, in the town of St. Nazaire, TSM Haines set a magnificent example of courage and devotion to duty to all who served with him [1a].
He embarked for the raid on board motor launch ML 177 [2].
Wounded and prisoner of war [3][3a][3b].
27 April 1946 commissioned Second Lieutenant, East Surreys [4].
18 February 1973 (Major) (Pioneer Corps) retired from military service [5].
His death was announced in Commando Association newsletter 99 of September 1994.
Sources
[1] London Gazette 37162, page 3493.
[1a]  Recommendations for Awards / National Archives file WO373/46/272.
[2] St Nazaire Society/James Dorrian.
[3] Casualty Lists / National Archives file WO417/49.
[3a] Prisoners of War  /National Archives file WO392/1 (Stalag 8B).
[3b] German Record Cards of British PoW's / National Archives file WO416/156/394 (Stalag 133).
[4] London Gazette 37589, page 2667.
[5] London Gazette 45909, page 2340.
Photo of Commando in Gallery:
Yes
Archive pages :
No 2 Commando
St. Nazaire Commandos
Prisoners of War