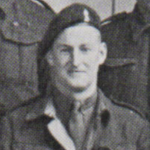 Captain Eric Lunn was awarded the Military Cross twice and also received a Mention in Despatches for his gallantry during operations with 2 Special Boat Section [1][2][3].
He joined the SBS as a Second Lieutenant from the Commando Depot on 24 September 1942 and took part in several operations notably Oran Harbour. He then joined the SBS operating in the Mediterranean and was promoted Captain. By February 1944 he was at Strategic Allied Command South East Asia (SACSEA) with 'Z' SBS [4].
Military Cross
This Officer has taken part in the following special operations during the course of four submarine patrols: Carrying out special reconnaissance prior to operation Avalanche, and landing of agents and stores in enemy territory on four separate occasions. His bravery and zeal had a very fine influence in the Special Boat Section operations [1a].
Mention In Despatches
No.2 Special Boat Section.
Oran Landings. Assault on port by H.M.S. Walney and H.M.S. Hartland. 8th November 1942.
Second in command of the Special Boat Section party under Captain Holden-White, and in charge of the party operating from H.M.S. Hartland - when the ship was hit repeatedly and his own Folbot smashed, this Officer organized his party to assist in fighting the fires until 'abandon ship' was ordered. He later assisted in the rescue of several wounded Americans who were struggling in the water [2a].
Bar to the Military Cross
On the night of 23rd March 1944 Captain Lunn and Sergeant Gilmour of the Special Boat Section landed in a canoe from a submarine on the Greek Island of Cephalonia to carry out a special operation.
Their mission having been successfully completed the weather was too rough to enable them to return to the submarine and the canoe foundered. Captain Lunn decided to make for the hills and attempt to get into touch with a partisan organization with a view to subsequent escape. Having disposed of a German sentry that was unfortunately encountered, thereby raising the alarm, Captain Lunn succeeded in establishing his identity to friendly Greeks and obtained shelter.
In spite of enemy vigilance, cold, lack of food and the necessity of making his way on foot over about 250 miles of mountainous enemy occupied territory, Captain Lunn, with Sergeant Gilmour, managed to get to the Greek mainland undetected and thence to the Preveza area, where the two men contacted the British Military Mission, who arranged for their transport to Italy.
Captain Lunn returned safely with useful intelligence thirty days after landing. In successfully carrying out the special operation and in subsequently escaping from enemy occupied territory, Captain Lunn  showed high qulaities of courage, endurance, and resource [3a].
Sources
[1] MC - London Gazette 36382, page 827 dated 17 February 1944.
[1a] National Archives file WO373/94/174.
[2] MiD - London Gazette 36486, page 1928 dated 27 April 1944.
[2a] National Archives file WO373/94/448.
[3] Bar to MC - London Gazette 36699, paged 4249 dated 14 September 1944.
[3a] National Archives file WO373/96/41.
[4] See Linked Content below.
Full Obituary in the Gallery [view....].
Commando Association newsletter 101 issued September 1995.
Linked content:
A timeline of Commando Training
Photo of Commando in Gallery:
Yes
Archive pages :
Special Boat Section/Squadron/Service