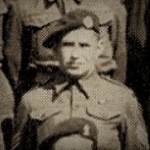 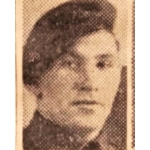 Lance Sergeant Eric Khytovitch MM from Ancoats, Manchester, was reported missing 10 June 1944 during operations at Normandy later confirmed killed in action [1][1a]1b].
No.6 Commando War Diary 10th June 1944:
"Place: In the field, Le Plein a.m. - 2 Troop kill 2 snipers with 'K' gun.  We are heavily mortared.  We answer with our own mortars. 0800 - Enemy attacks, all troops engage.  By 1700 hrs all attacks definitely repelled.  Suspect enemy got it in the neck.  Our own casualties total 16." [2].
1943 Military Medal for gallant and distinguished service in North Africa [3] .
Recommendation
"26 Feb 1943 Fedi et Attia (516128 Sheet 34)
After five hours fierce fighting in an engagement between VI Commando and three companies of the Herman Goring Jaeger Rgt., this NCO was ordered with his subsection to cover the withdrawal of two troops. Both troops passed through his position without casualty owing to the effective and well-controlled fire of his subsection. Although under heavy fire and running short of ammunition this NCO conducted such a skilful and offensive rearguard action with his subsection that he successfully neutralised the enemy attack in that locality" [4][4a].
​Sources
[1] CWGC.
[1a] Casualty Lists / National Archives files WO417/77 and WO417/79.
[1b] Report with photo in the Manchester Evening News 14 July 1944.
[2] No 6 Cdo War Diary
[3] London Gazette 36000, page 1997.
[4] Award Recommendations / National Archives file WO373/1/202.
[4a] Battle of Steamroller Farm.
[Image 1] Cropped from Gallery image titled 'No.6 Commando panorama July 1943.'
[Image 2] Manchester Evening News 14 July 1944.
Primary Roll of Honour:
6 Cdo. Roll of Honour
Linked content:
'Battle of Steamroller Farm'
Photo of Commando in Gallery:
Yes
Archive pages :
No 6 Commando