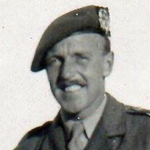 Donald Gilchrist was serving as a Captain in the Cameronians when he volunteered for the Commandos. After acceptance he went to the Commando Depot at Achnacarry in February/March 1942 and successfully completed his training after which he was retained there as an Instructor. The Commando Depot at Achnacarry had just been designated as the new centralised location for all Commando Training and staff were needed to assist with the initial intakes.
Later after joining No 4 Commando, he took part in both the Dieppe and Normandy landings serving as a Captain, and later Adjutant. He was second in command of the unit in Germany when he was released from full service and joined the Territorials.
22 August 1952 awarded the Territorial Efficiency Decoration [London Gazette 39628, page 4474].
Author in 1960 of the renowned book Castle Commando, Donald Gilchrist maintained links with his No 4 Commando comrades through the Commando Association. A member of the Central Ayrshire branch he participated in many annual pilgrimages to France.
In September 1974 he was presented with L'Ordre Chevalier de L'Ordre Merite by French Consul General, Monsieur Jean-Claude Richard, in Edinburgh. This award was created by General De Gaulle.
Major Gilchrist's death was announced in Commando Association newsletter 114 of March 2002.
Photo of Commando in Gallery:
Yes
Archive pages :
Commando Training
No 4 Commando