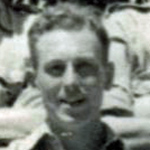 Trooper David Robert Peters, a Cadet from the 102nd Officer Cadet Training Unit, was commissioned 2nd Lieutenant on the 9th March 1940 [1].
Recommendation for Bar to Military Cross
"On 17 Apr.'45 Major D.R. Peters was in command of thre Tps which attacked the bridges over the R. Reno and neighbouring canals West of Argenta. Owing to the very narrow frontage along the width of the dykes, simultaneous frontal attacks down the three dykes were essential. During this attack Major Peters bravery and leadership were of the highest order.
Immediately beyond the bridge itself the enemy were strongly entrenched in weapon pits which Major Peters quickly realised must be liquidated if the bridge were to be held. He immediately rallied his Troop and personally led the assault over the bridge into the teeth of very strong automatic fire.
He himself personally shot 2 enemy before he was wounded. He remained where he fell, directing the assault which successfully cleared the position. He then withdrew his troops to behind the bridge and organised the D.F. The enemy launched two strong counter attacks in quick succession and Major Peters encouraged and rallied his Troops to a determined defence which broke both attacks.
Although in increasing pain, he insisted on seeing that his troops were properly dug into good defensive positions before allowing himself to be evacuated.
Throughout, his leadership and personal courage inspired all ranks and materially contributed to the sucess of the initial attack and subsequent defence" [6].
Sources
[1] London Gazette 34811, page 1533
[2] CVA gallery image No 2 Cdo officers January 1943
[3] London Gazette 36983, page 1427
[4] London Gazette 37235, page 4267.
[5] Commando Association newsletter 108.

Notes
Source at [5] states he also served in No.5 Commando.

Photo of Commando in Gallery:
Yes
Archive pages :
No 2 Commando
No 5 Commando