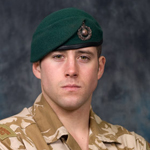 Marine David Hart, Charlie Company, serving as part of Combined Force Sangin, died in an explosion while on foot patrol in the Sangin District of Helmand Province. He was part of a joint reassurance patrol with the local Afghan Army
David Hart joined recruit training in February 2009, and stood out as one of the top recruits and in recognition of this was awarded his Diamond. He passed out for duty as a Royal Marines Commando on 16 October 2009, when he was awarded The Commando Medal. The Commando Medal is awarded to the man who, throughout training, shows, to an outstanding degree, the qualities of the Commando Spirit. These are defined as: Determination, Courage, Cheerfulness and Unselfishness.
On completion of recruit training he was drafted to 40 Commando Royal Marines, based in Norton Fitzwarren, near Taunton. Joining Charlie Company in October 2009 he immediately conducted Mission Specific Training for an operational tour with 40 Commando in Afghanistan. Qualifying as a combat medic, and singled out as an impressive and mature individual, he was quickly selected to become part of the newly formed Police Mentoring Team. In April 2010 he deployed to Afghanistan and was based at Forward Operating Base Sabit Qadam and Patrol Base Sangin Tufann.
[Source: MOD]
Primary Roll of Honour:
'Roll of Honour since 1946'
Photo of grave in Gallery:
Yes
Archive pages :
RM Commandos 1946 - present
40 Commando RM
Afghanistan