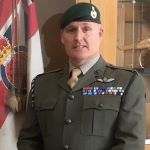 Corporal Darren Hunt was awarded the Military Medal in recognition of distinguished service during operations in the South Atlantic in 1982 [1].
Recommendation for MM
Corporal Hunt was a Section Commander in 8 Troop, 'Z' Coy, 45 Commando Royal Marines* throughout the campaign.
His qualities of leadership, determination, professionalism and good humour were outstanding, often in the most arduous and dangerous circumstances.
During the attack on Two Sisters, he was the first to spot enemy positions and to give accurate reports which resulted in artillery fire being brought to bear. It was while leading his section that he became wounded and lost the use of his arm. Ignoring his wounds he continued to lead his men forward until they were successful in their mission.
Extract from the Royal Navy/M.O.D. website re MBE.
A Royal Marines officer from Exmouth has been awarded the MBE in the New Year Honours List for 37 years dedicated service to the Corps.
Major Darren Hunt has been recognised for his “selfless dedication to the Service on operations worldwide” with his performance described as “outstanding”. During his career Maj Hunt has served in the Falklands, Bosnia, Sierra Leone, Kosovo, Iraq and Afghanistan first as a General Duties Marine and then as a specialist aviator.
Most recently he was involved in delivering essential humanitarian aid after Typhoon Haiyan struck the Philippines in 2013.
His citation reads “A supremely brave Marine, a consummately professional aviator, and a first class mentor who has constantly sought ways of improving operational capability, he is a superb role model.”
Sources
[1] London Gazette 49134, page 12840 (errata LG 49196, page 16352).
[2] London Gazette 52703, page 16843.
[3] London Gazette 61092, page N6.
[4] London Gazette 62047, page 17024.
[Image] Maj. Darren Hunt.
Notes
*Unit amended from 42 to 45 - source Major Darren Hunt MBE, MM.
Forename amended in LG errata @ [1] above.
Archive pages :
RM Commandos 1946 - present
45 Commando RM
3 Cdo. Bde. Air Sqn / Helicopter Force
Falklands
Northern Ireland