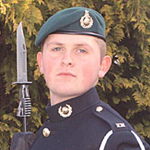 Marine Dale Gostick died whilst serving as a Viking operator in 3rd Troop, Armoured Support Company, at the Sangin crossing of the Helmand River, southern Helmand province, Afghanistan. His troop were returning to their Forward Operating Base, after providing essential support to 2nd Battalion The Parachute Regiment (2 PARA) Battle Group, when the Viking he was driving struck a suspected mine. Sadly, despite the best efforts of the medical team on site, Marine Gostick was pronounced dead at the scene.

Marine Dale Gostick was known by his friends as ‘Master Chief General of the Universe’, which reflected his humorous and relaxed approach to life. He was 22 years old and from Oxford. He joined the Royal Marines in late 2004, and after successfully completing 32 weeks at the Commando Training Centre, he was passed for duty as a Royal Marines Commando.

After training, he joined Lima Company of 42 Commando Royal Marines, based in Plymouth. In 2006, after initially serving as a general duties marine, he successfully completed the Viking Operators Course based in Bovington and deployed to Afghanistan with the Armoured Support Company for Op HERRICK 5 with 3 Commando Brigade. During his two operational deployments to Afghanistan, Mne Gostick’s support to the ground troops of 12 Mechanised Brigade, 52 Infantry Brigade and finally 16 Air Assault Brigade has been invaluable.

Throughout his training and on each operational tour, Marine Gostick had demonstrated himself as a shining example of a Marine and he took great pride in being a diligent and dedicated Viking Operator. He was clearly a man to watch, a man who had much potential to progress swiftly through the rank system.