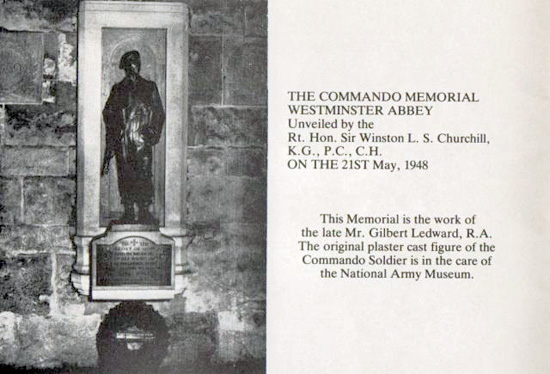 The Combined Services Memorial at Westminster Abbey was unveiled on the 21st May 1948 by the Right Honourable Sir Winston Churchill KG PC.

It was designed by the sculptor Gilbert Ledward, with three bronze figures in stone niches, with the dates 1939 and 1945 on tablets between. The models for the figures were serving members of the forces – the submariner was modelled on Leading Seaman Reginald Read, the Commando on Company Sergeant Major Ayres, and the representative of the Parachute Regiment was Corporal Howard Elliott.

A Roll of Honour for Commandos is on display in a case in the nave of the Abbey and the Commando Association Battle Honours flag is framed and displayed on the wall in St George’s chapel. The Roll was pesented to the Abbey in 1949 by officers of the Commando Depot and completed though the generosity of Brigadier R.J.F.Tod.

A thanksgiving service with dedication of the Battle Honours Flag took place on the 15th April 1961.

The Laying Up of the Flag, unveiled by The Queen Mother, was on the 1st May 1971 (unfortunately the dagger at the top of this frame was stolen many years ago.)

Each year there is a small informal wreath laying Sevice at this Memorial. The service, arranged by the London branch of the Commando Association, usually is at 2pm on the Saturday of Remembrance weekend. Contact the Association for confirmation of this year's timings.
View Images of the Laying up of the Battle Honours Flag in 1971
View Images of the Wreath Laying Services